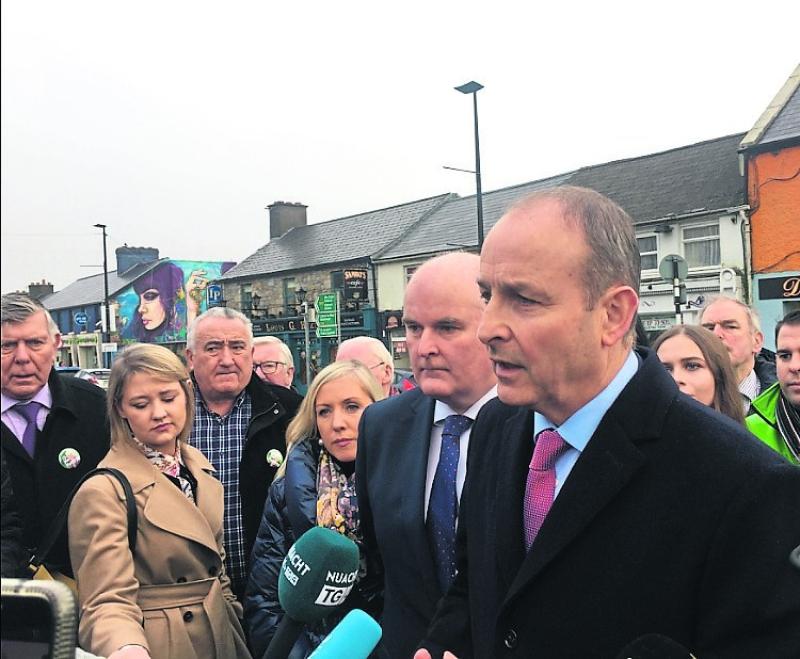 He may be the bookies favourite to become the next Taoiseach, but in order to make those odds a nigh on certainty Fianna Fail leader Micheal Martin is pinning his hopes on securing two seats in Longford Westmeath on February 8.

It's a simple, yet tricky conundrum, facing Mr Martin as he looks to return the party he has led since 2011 to Leinster House's top table.

Like his rival, Taoiseach Leo Varadkar, the wily Cork South Central TD was in Longford this week to offer support to the man tasked with achieving that two seat goal-Cllr Joe Flaherty.

In what was a further political barometer as to the importance both main parties are placing on the county in terms of wrestling the Dail balance of power from the other, Mr Martin took little time in extolling the virtues of his Longford based candidate.

“Joe Flaherty has worked for a long number of years and I remember the late Peter Kelly coming to me and saying we have a first class candidate in Joe Flaherty and he was certainly correct in that,” he said.

It's the best part of a decade since Fianna Fáil held any sort of political sway in Longford at a national level, courtesy of the aforementioned and late Mr Kelly.

They, of course, were different times.

Major austerity, typified by sweeping job cuts and a crestfallen construction sector ended in what was a fourth successive year of recession and negative GDP growth.

Locally, the county was in a similar and, arguably more regressive economic hiatus with rising unemployment levels and the lingering fallout from the closure of Connolly Barracks in 2009 still very much evident.

It was an accumlation of controveries which ultimately put paid to Mr Kelly's distinguished political career and Fianna Fáil's departure from power in what was the worst defeat of a sitting government since the formation of the Irish state in 1922.

Fast forward nine years or so and the party, according to recent opinion polls, looks set for a return to government.

Mr Martin knows that. The spring in his step and responsive body language as he greeted members of the public outside Cllr Flaherty's constituency office yesterday (Tuesday) morning was symptomatic of a politician brimming with confidence and quiet assurance.

Keen to preface his party's plans in addressing the two perennial political hot potatoes of housing and crime, Mr Martin must first ensure his party secures the largest number of seats when the finishing touches are put to the make up of Ireland's 33rd Dáil.

And that's why counties like Longford will prove pivotal in ensuring those well laid plans become a distinct reality.

“Joe understands the need of Longford socially, economically and it forms part of a wider agenda we have experienced throughout this campaign so far of regions being left behind,” said Mr Martin of his party colleague and general election hopeful.

“I think Joe is the kind of strong candidate that can pull all of that together for Longford and be a very strong advocate for the county and Westmeath in Dáil Eireann.”

Rousing words they might be, they are ones the Fianna Fáil leader will be hoping transcend to the ballot boxes in two weeks time.