Restoration, reopening and rededication of ‘The Longford Phoenix’ 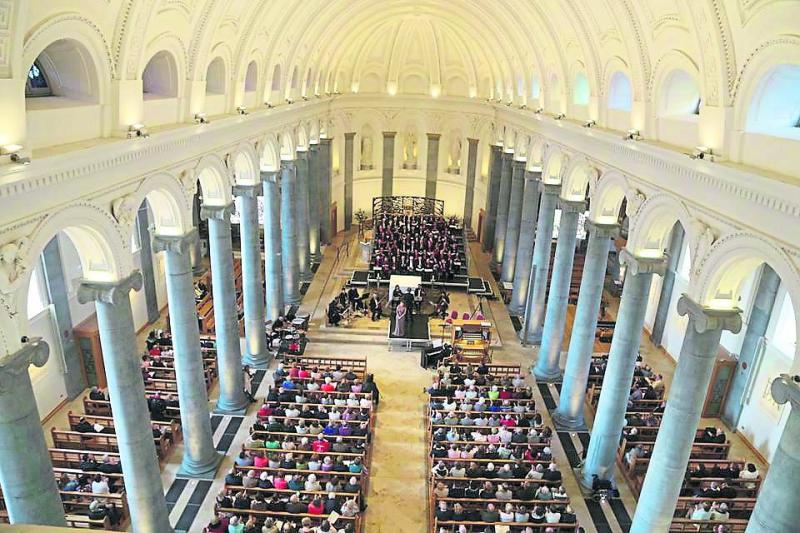 The inside of the beautifully restored St Mel’s Cathedral as members of the local community gathered inside for a concert. The cathedral was engulfed by a fire on Christmas Eve, 2009, and was restored

In this article, Bishop Duffy remembers the powerful words of hope from his predecessor Bishop Colm O’Reilly when all seemed to be lost.

Bishop of Ardagh & Clonmacnois +Francis Duffy was shocked to the core by the magnitude of the devastation in the wake of the St Mel’s Cathedral fire.

In this article, Bishop Duffy remembers the powerful words of hope from his predecessor Bishop Colm O’Reilly when all seemed to be lost. And he highlights that St Mel’s Cathedral is now a good news story, culminating in the restoration of a treasured cathedral for the parish community of Longford, for the diocese of Ardagh and Clonmacnois and for the country.

At that time I was a priest ministering in the neighbouring diocese of Kilmore and like people throughout the country, and Irish people abroad, I was shocked to the core at the magnitude of the devastation.

However, it was the sadness of the people of Longford which had the greatest impact on me. I will never forget Bishop Colm’s resolve, strength of character and leadership when he announced that Saint Mel’s would be rebuilt.

Bishop Colm spoke as smoke still bellowed from our much loved cathedral, but his powerful words provided the necessary hope at a moment when all seemed to be lost.

Following my appointment as Bishop of Ardagh & Clonmacnois, in July 2013, Saint Mel’s Cathedral became a focus for me.
I recall visiting Longford to meet Bishop Colm a few days before my appointment was publicly announced to drive with him up Saint Mel’s Road along the side of the cathedral with its temporary roof. Shortly afterwards I was brought into the building to view the progress to date. The new pillars had just been installed and there was talk of a rail track being installed to bring in the altar.

By the time I arrived in October 2013 the work was well advanced. I joined the small and focused group that made up the Saint Mel’s Cathedral Restoration Project Committee. This group, with great skill and attention to detail, steered the project from its early stages to its completion.

It was a real education to be part of this talented and focused group.

Reopening in 2014 a remarkable achievement
During my first year as bishop I celebrated Mass in the Cathedral Centre at Saint Mel’s College. It had its own special atmosphere.

The very first Sunday Mass I celebrated there, the Cathedral Choir sang Ecce Sacerdos Magnus in welcome, a very emotional moment I remember to this day. Over the next year, the cathedral changed gradually from a very dark and cold building site to the beautiful building we celebrate today. I thought the reopening after five years was a remarkable achievement.

The Administrator, Fr Tom Healy, who bore the brunt of the parish organisation in these exceptional circumstances, celebrated the very first Mass in the newly restored cathedral on the Friday before Christmas. A few days later Bishop Colm celebrated the Christmas Eve Mass, just as he had five years previously, hours before the fire started.

Those moments of continuity and newness were poignant. It was clear that people were delighted to be back.

Parishioners were glad to be back in their church where so many family occasions took place. People marvelled at the new feel to an old and familiar sacred space. It was a very moving experience for many and I saw more than a few tears.

The rededication took place on May 17, 2015. The President of Ireland, Michael D Higgins and his wife Sabina were present; they returned to the cathedral for an hour after the reception for a closer look at the various pieces of art.

Many of the bishops of Ireland were also present to offer their prayerful solidarity with the people of Longford and Ardagh & Clonmacnois along with public representatives and parishioners from each parish of the diocese.
It was a very happy occasion with Bishop Colm delivering the homily from the heart.

I recall the anointing of the altar with sacred chrism. The oil was poured onto the surface and then rubbed in slowly and deliberately to mark this altar as the focal point of the cathedral.Behind the scenes for the opening and for the rededication were very well organised teams who looked after everything from seating, services, catering, publicity and parking.

It was wonderful to see so many people coming together with such enthusiasm for these two great moments in the history of this noble building.

Over the last five years the cathedral has settled into the normal daily and weekly routine of the parish, and of the diocese.
It continues to have many visitors from near and far.

Thanks to so many people, Saint Mel’s is now a good news story - one of determination to rebuild and of marshalling our God given gifts and skills – culminating in the restoration of a treasured cathedral for the parish community of Longford, for the diocese of Ardagh and Clonmacnois and for the country, and which provides a welcome place of worship to serve our future generations.