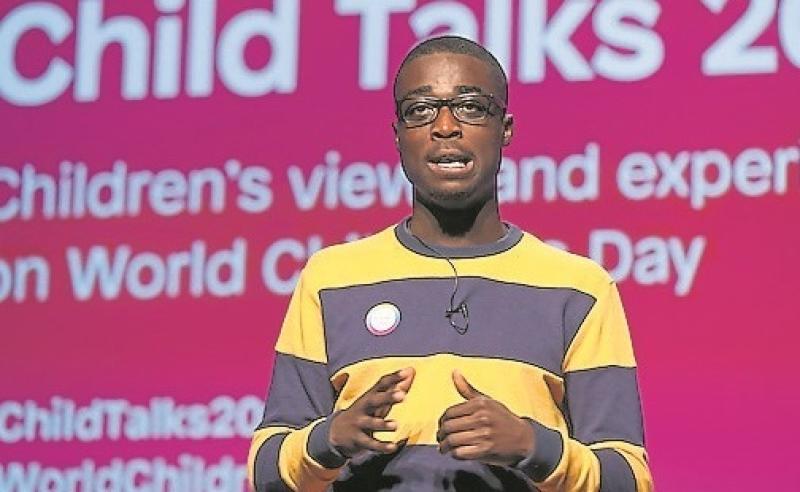 Longford’s Eric Ehigie took to the stage at the Printworks, Dublin Castle on World Children’s Day to take part in Child Talks, a series of inspiring stories from children and young people.

Child Talks was hosted by the Ombudsman for Children’s Office on World Children’s Day to highlight the importance of listening to children and considering their point of view. The event was opened by the Minister for Children and Youth Affairs, Katherine Zappone and was attended by over 400 people. It was also broadcast live on RTÉ News Now.

The nine young speakers who took part in Child Talks discussed mental health, disability, education, period poverty and climate change. Eric used his talk to encourage other young people to get involved in their communities, and to particularly highlight the need for all minorities and cultural backgrounds to be represented in our political system.

Eric is currently studying law and business at NUI Galway. He was President of his student council and Welfare Officer of the Irish Second-Level Students’ Union.

Eric said: “Longford’s greatest trait is undoubtedly its diversity. If one takes a trip to the mighty Longford, they will be met with views of different people, from different backgrounds, all within the same town.

“It is a town like none that I have ever been to; children from different continents play together, students from all across the world study together, mothers with different cultures gossip together and most importantly; people, regardless of where they come from, live together.

“As I became more interested in the local political system, I realised that the diversity in our community was not being visually represented at all.”

Highlighting the importance of Child Talk the Ombudsman for Children, Dr Niall Muldoon said, “We celebrate World Children’s Day by listening to what young people have to say about issues that are important to them. As always, I am inspired by the abilities of young people and their inherent sense of fairness.

“This year marks the 30th anniversary of the UN Convention on the Rights of the Child. The young people today remind us that despite the progress made there is still more to do to protect and promote children's rights in Ireland. There are still too many young people on the fringes and too many young people falling between the cracks within Irish society.”