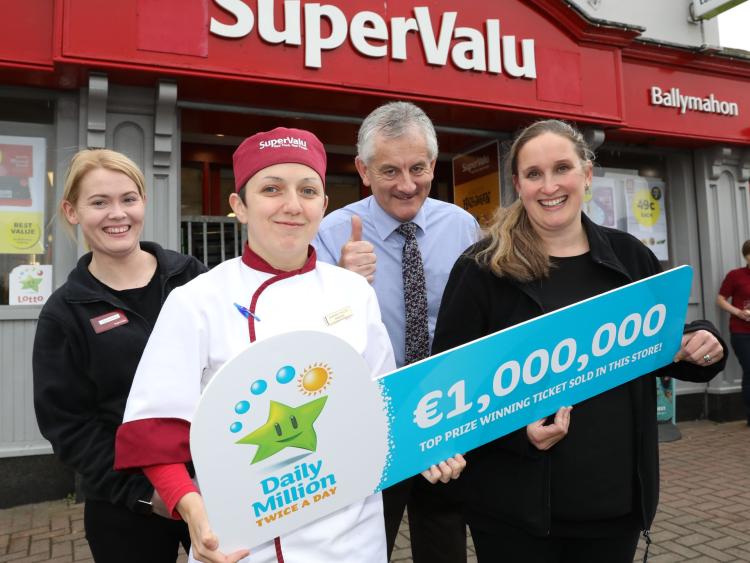 Owner of Smyth’s SuperValu Pat Smyth (centre) pictured with staff as the shop celebrated the win back in October PicTure: Mac Innes Photography

It’s been just over a month since a National Lottery announced that a prize of €1 million was won by a lucky Ballymahon shopper.

The win was announced on October 31 - Halloween - but there’s nothing scary about a million bucks, especially ahead of Christmas.

But the National Lottery has revealed that the lucky winner has yet to come forward and claim the money.

In a statement released to the Longford Leader on Monday, National Lottery urged anyone who might have purchased a lotto ticket in Ballymahon in October to check their tickets to see if they struck lucky.

“The National Lottery are still waiting to hear from the lucky ticket holder and we are encouraging all of our players from Co Longford to check their tickets carefully,” the statement read.

“Given the high profile media coverage of the win in Ballymahon in Co Longford, there is a strong possibility that the ticketholder already knows they have won but for whatever reason are taking their time before they contact us to discuss their prize.

“We are calling on the lucky winner to contact the National Lottery Prize Claims team on 01-836 4444 so we can arrange for the prize to be collected just in time for Christmas.”

The winning ticket was purchased in Smyth’s SuperValu, Ballymahon.