Longford students in the eco-friendly fight against climate change

Longford student Eric Ehigie: Education is passport to the future 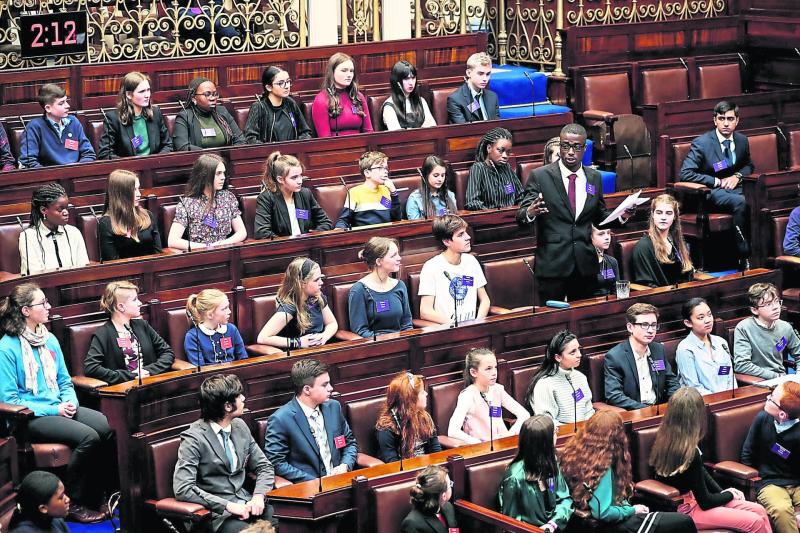 Members of the Youth Assembly on Climate inside the Dáil Chamber listening to Eric Ehigie, Longford giving his address Picture: Maxwell Photography

Longford student Eric Ehigie came in for considerable praise following his contribution to the historic RTÉ Youth Assembly on Climate at Dáil Éireann.

Longford duo Eric and Áine Nic An Fhailí were among 157 (the same as the number of TDs in the House) pupils aged 10 to 17 from all across the country who attended last Friday's assembly along with Ceann Comhairle Seán Ó Fearghaíl.

Moyne Community School student Eric, who is also Equality Officer of the ISSU was spokesperson for the assembly’s ‘Education Group’.

Addressing the assembly, Eric outlined that ‘education was the driving force that put a halt to discrimination within Europe after the second world war, it lessened the blow of segregation in the USA following the Jim Crow era, it brought our island to peace through the Good Friday agreement’. He added, “I whole-heartedly believe that through education we can bring everyone with us into the eco-friendly fight against climate change!”

Assembly members came up with ten recommendations for action to stop climate breakdown and these were presented to Mr Ó Fearghaíl.

Among the recommendations is a targeted nationwide information campaign to educate the population about the climate crisis regarding the causes, the effects and the solutions.

Another recommendation is mandatory "sustainability" education from primary level to the workplace including a new compulsory Junior Cycle and optional Leaving Certificate subject.

The Assembly members stressed, “We are not experts. In our recommendations we offer ideas but we do not have all the answers. It is a starting point for adults and particularly for those elected to protect and progress our society.”

Eric, in his address, pointed out, “Education, as noted by the African-American civil rights activist Malcolm X, ‘is the passport to the future, for tomorrow belongs to those that prepare for it today.’ And tomorrow, according to some of the world’s finest scientists, is not promised to humanity if we continue to exacerbate our environmentally destructive actions.”

Eric believes that at the moment, due to a lack of knowledge, there are many sceptics who shrug off the environmental warnings being projected by scientific research.

He suggested that it was through educational solutions, like the ones his group were proposing, ‘will inform everyone, especially the politicians, about why there is no benefit in polluting our environment and destroying our planet, as there is no Planet B’.