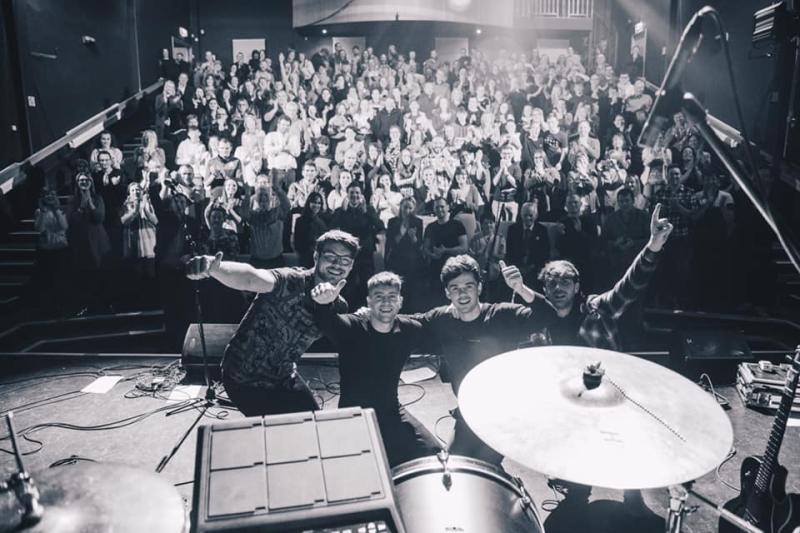 White, Pink + Blue: Brave Giant and their fans at the sold out, intimate album launch gig, which took place at the Backstage Theatre on Sunday, October 6 PICTURE: NATHAN SHERIDAN (VIA FACEBOOK)

Brave Giant’s debut album is a gift to the ears from beginning to end, writes Jessica Thompson

The Backstage Theatre was jammed on Sunday, October 6, as Drumlish band Brave Giant took to the stage on which their musical career began almost four years ago to the day. But this time, it was for the launch of their debut album, White, Pink + Blue.

The album itself is a gift to the ears from beginning to end, with beautiful ballad, Maid of the Sea, being a particular favourite track of this reporter.

But there’s nothing quite like seeing it done live - especially when you get the four lads lined up on the stage to perform a pared back version of the song to a completely silent and awe-struck audience, complete with four part harmonies and beautiful string accompaniments.

It’s the type of song you could listen to again and again - especially if the lads decide to release a live version.

The more energetic tunes are equally impressive, creating sounds that seem far too rich and melodic to be coming out of just four young men. But that's part of the show as those four young men put their talents to good use in whatever way they can and with as many instruments as possible.

In a 2018 interview, banjo and mandolin player Ross McNerney (who also plays the keys), told the Longford Leader that he was “barred” from competing in the Fleadh because he kept breaking away from the traditional accompaniment role of the banjo and doing solos.

That has certainly worked out well for Brave Giant, as the banjo and mandolin are two of the most prominent instruments on the album.

And a talent like Ross’ certainly shouldn't be kept in the background: put him on the stage and the energy in his performance makes him a pleasure to watch, as well as listen to.

Another who will not be confined to the background is the guy who literally sits at the back. Drummer, Emmett Collum’s performance at the album launch gig would make even the fittest members of the audience feel out of breath.

During one of the tracks, the top of his drum stick broke off and yet he continued playing like nothing had happened. Whether or not he even noticed was anybody’s guess.

In fact, so intense was his performance that if his drum kit had started sinking into the floor with every beat of a stick, Emmett probably would have kept playing in that sort of energetic trance that had all eyes on him at various stages of the show.

And, while Ross and Emmett certainly captured the attention of the audience, that in no way means that vocalists Podge Gill and Mark Prunty were outshone.

In fact, the dynamic of all four of the Drumlish lads is something that’s not often seen in a band. Each and every one has his own moment in the spotlight and everyone is an integral part to every song - and the craic and banter they have on stage adds something special to their performances.

There’s also something special about the contrasting vocals of Podge and Mark, who also play the guitar and bass guitar respectively.

Their strong and edgy harmonies are what make these two vocalists really stand out from the crowd of other musicians in the charts right now.

There were sighs and ‘wows’ from the audience when Podge’s voice seemed to project effortlessly to the back of the theatre as he stood a distance from the mic and sang Maid of the Sea, while his bandmates harmonised in that folksy Brave Giant way that only they can do.

Where Podge’s voice has a somewhat husky, trad tone to it that brings a certain folksy charm to the tracks on which he sings lead, Mark’s voice is equally strong and just as effortless, but with a more soulful element to it that leaves you always wanting to hear more.

With all of that combined talent, it comes as no surprise that White, Pink + Blue jumped to the top of the Irish charts within a week of being released.

If you haven’t got the album yet, it’s available via all online platforms or can be purchased in Denniston’s, Longford on CD and vinyl. But if you get the chance to see them perform it live too, grab the opportunity with both hands. You won’t regret it.