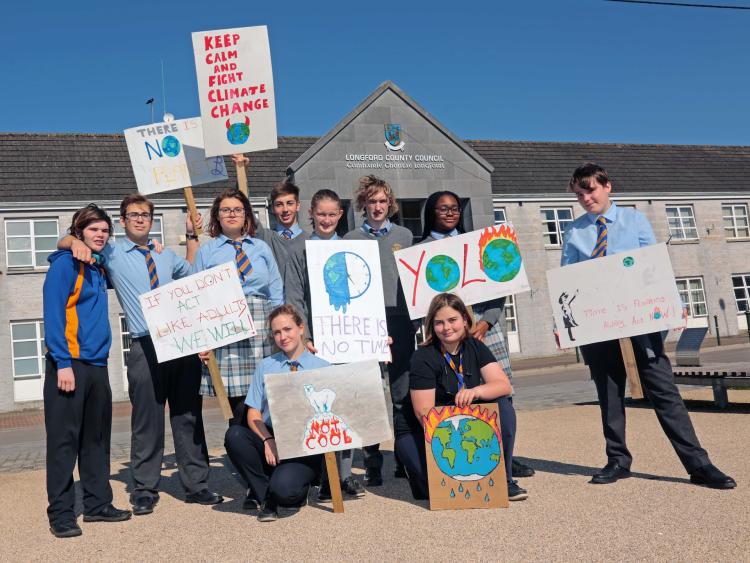 GLOBAL STRIKE: Students demand action now and insist ‘we all dream of a planet that is green’

A large number of students from many schools throughout Longford, joined forces in protest on Friday, September 20, as part of a Global strike for climate change action.

Students from over 130 different countries worldwide engaged in the strike, with a strike in Longford town being organised by Ardagh native, Eliza Jane Pearman Howard. Eliza is the founder of Fridays for Futures Longford, where she protests outside the Longford county council offices almost every Friday, in a bid to get those in power to implement a climate change action plan.

Eliza was joined by well over one hundred students from throughout secondary schools at Market square in Longford town on Friday afternoon. “We all dream of a planet that is green,” was the main message as students, chanting and showing off their banners, began their march to the Longford county council offices on Great Water street, with drums in toe.

Addressing the crowds Eliza spoke of her delight at getting the message across.

She said: “Thank you so much for coming. I did not expect this many people.

“You all know why we are here. It is our planet and it is us that will be affected.

“They need to listen to us,” she added, pointing to the Longford county council offices.

Upon arrival at Arás an Contae, students let their voices be heard and highlighted their grievances through a series of climate change related chants. Many of them feel they are being let down by the adults of today, with the issue seeming to be ‘pushed under the carpet’.

Students were also joined by a number of adults on the day, who felt obliged to join their quest for action.

Parent Annette Corkery told the Leader: “My daughter wanted to come and she, like everyone else here, is worried about climate change.”

Ann Gerety-Smyth added: “There is a lot of talk. But nothing ever happens.
“We have let them down.

“They (Children) feel like there is no hope, but we are here to support them here today.”

These views were echoed by Joanna Pearman, mother of Eliza-Jane, who said the time for change is upon us.

She said: “It is their future and adults, the people in power, need to hear their voices.

“There are too many old men running the country and things have to change, because it is not sustainable.

“You look around today and the way we are living is just not sustainable. All aspects of our lives and our systems must change.

“It is the children’s future and unfortunately it is them who will have to deal with the consequences of this lifestyle.”

Eliza Jane Pearman Howard spoke of her delight at the huge turnout on Friday, noting that it highlights the severity of the issue. She then called on government officials to listen to the demands of the hundreds of thousands of children on strike throughout the world and start implementing some sort of climate change action plan, sooner rather than later.

Eliza told the Leader: “I never expected this many people and I am really grateful to everyone who came out.

“They (people in power) know what we are saying. They need to listen to us.” She continued.

“They need to start to looking at our demands, which are all on social media, and actually take action to correct what they are doing and make it better.

“We have known about climate change for a long time now. Politicians need to now realise that is no longer the 1900’s it is 2019.

“The time for action is now and not later.”

The strike organised by Eliza was just one of a number held throughout Longford and the world, with over 4,000 registered strikes worldwide.