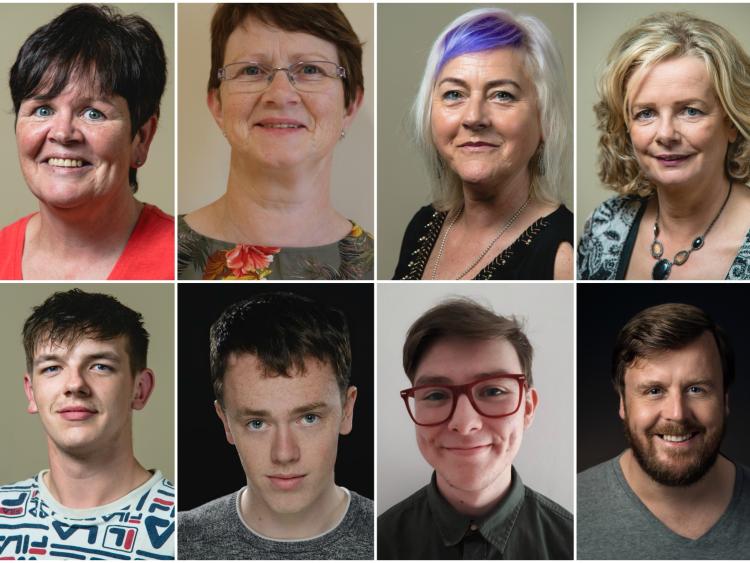 The cast and crew of Further Theatre Company's latest production, Murder at Checkmate Manor, which will be performed this weekend

The Backstage Theatre is the place to be this weekend as the Farnsdale Avenue Housing Estate Townswomen's Guild team up with Further Theatre Company to bring a thrilling murder mystery to Longford.

This hilarious and entertaining performance was written by David McGillivray and Walter Zerlin Jr and is directed by Longford's own Niall Brewster.

Maggi has previously had roles in Perfida, Till Petals Fall, Relief, The Accused and Bookworms. She has recently graduated from college after studying Advanced Level Performing Arts and Theatre studies and is bound to put on a good show.

Mary McLoughlin will take on the roles of Audrey Watkins, Lady Doreen Bishop, Joan Bishop, Violet Bishop and Mrs King in this performance.

Mary has appeared in various plays and one act plays including Holy Mary, Ruby of Elsinore, Losers and also The Accused. She has even thrown her hand at directing having directed None The Wiser for The Pillar Box Drama Group in Moydow.

Dylan Kelly isn't a Farnsdale lady but that won't stop him from taking to the stage this weekend to show off his talent in the role of Inspector Reilly.

Read also: Plenty of events as Longford celebrates times past during Heritage Week 2019

Dylan discovered his love for acting after doing a production, Tarry Flynn, with TY. As a result, he joined and has had roles with the Backstage Youth Theatre in DNA, The Glass Slipper and Prince Handsome .

Ann Marie Donohoe will also be taking to the stage in this thrilling murder mystery in the roles of Pawn the Butler and Colonel King.

Ann Marie is a member of the Bea Masterson Drama Group. She has taken part in several productions such as The Field, The Hiker, Stop it Nurse, The Real McCoy and Juno and the Paycock.

Anne Gerety will be making her stage debut this weekend. And what a debut as the Kenagh lady will be taking on not one, not two, but three roles: Thelma Greenwood, Daphne Bishop and Rose Bishop.

A newcomer to the acting world but taking to it like a fish to water, this is Anne's first time to tread the boards and Furthur Theatre are delighted to have her on the team.

Production manager, Daire Ó'Muirí is delighted to be returning to work with Furthur Theatre Company, taking a step behind the scenes after playing Mac in last year's production of Tilsonburg.

Currently studying Drama and Theatre Studies in Trinity College Dublin, Daire has had plenty of experience both on and off stage beginning with acting in Backstage Youth Theatre's annual pantomimes and later working on sound design.

The youngest member of the team, is Killian Reid. This will be his second production with Furthur having worked as part of the stage crew on Tillsonburg last year.

He has been a part of Backstage Youth Theatre for four years, having appeared in Prince Handsome, DNA, League of Villians and many more.

He has also previously worked backstage as crew and stage manager on many productions including Castle Rackrent and Stars In Their Eyes. Killian has also been on stage multiple times as the drummer of local band Undefined.

And who could forget about the production's director, Niall Brewster?

This is Niall's second production to direct with Furthur Theatre Company. The local man is about to embark on a Masters in Theatre Practice and Production in NUI Galway.

He has appeared in various plays including Tillsonburg, Mediocrity, A Personal Thing, Squinty, What's for Pudding, Arrah na Pogue, Many Young Men Of Twenty, Sharon's Grave, The Carnival at Glenaduff, Guest of The Nation, and Ritual for Dolls.

He is no stranger to the screen either having been in several short films and documentaries including Taken Stock, Abbeyleaks, The Voting Age, The Lollipop Man, Shellshock, Fingal's Finest, Summon Her Children, I Died and Went to Cavan.

He has also appeared in ads for Bank of Ireland, Social Anxiety Ireland, Skoda and KBC Bank.

Furthur Theatre company was created in 2018 with the view to creating full time theatre all year round in Longford and the surrounding areas.

Murder at Checkmate Manor will come to the Backstage Theatre this Friday and Saturday, August 23 and 24. Tickets can be purchased via 043 33 47888 or backstage.ie.