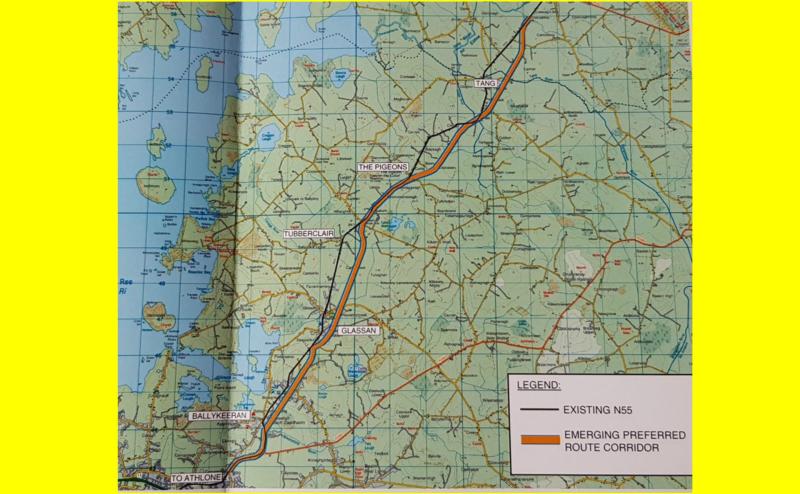 The N55 Athlone to Ballymahon road is one of the busiest inland roadways in the country and today the emerging preferred route corridor (EPRC) for the realigned and upgraded N55 was unveiled to the public for the first time during a consultation event in Tubberclair Community Centre.

Six proposed end to end route options were presented to the public in October 2018 and a detailed appraisal process was subsequently undertaken in order to determine the preferred route option.

The realigned and upgraded N55 will by-pass the villages of Ballykeeran, Glasson, Tubberclair and Tang and it will also incorporate some of the existing route.

It is understood that the time frame for the project is between eight and thirteen years.

Officials and the project design team suggest the EPRC will affect the least amount of people.

However, Westmeath County Council member Cllr Tom Farrell explained on local radio that it’s going to ‘impact severely’ on some landowners and houseowners, including a dairy farmer and he pointed out that ‘a house will have to be taken out as well’.

The route is 25% to 30% populated by HGV traffic and Cllr Farrell, said people know the route has to be improved because of the volume of traffic on it. He added, “In one sense it is progress, and in another sense, it is regress for somebody else and hopefully everyone will sit down and we’ll make sure everyone is happy.”

Members of the public will have the opportunity to make observations on the proposed route until Autumn, before the process of securing funding for the project will begin.

More than 600 submissions were made previously in relation to the route options.

Drawings, showing the Emerging Preferred Route Corridor as a 150 metre wide corridor, are on display at today’s event in Tubberclair up until 8pm and staff from Westmeath National Roads Office (WNRO) will be on hand to respond to any issues or queries people may have regarding the scheme.

Following the public consultation meeting, drawings of the EPRC will be published on the Westmeath County Council website and they can also be viewed at WNRO, Culleen Beg, Mullingar.