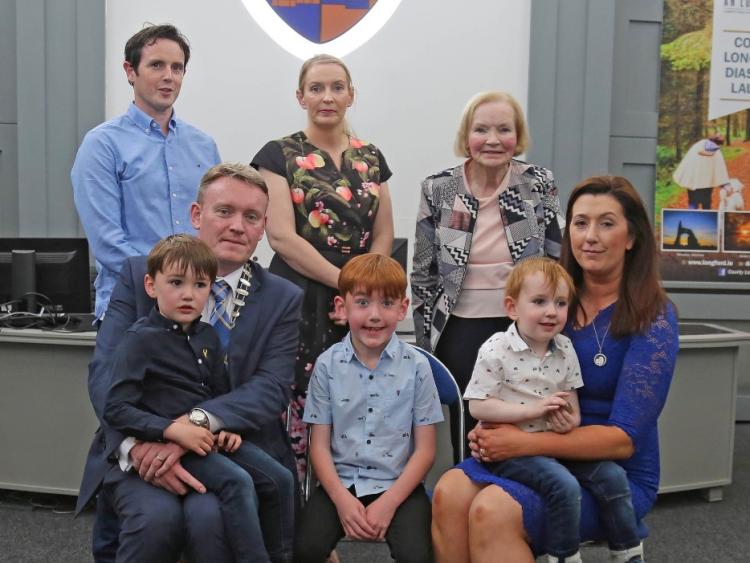 Fine Gael's Cllr Micheál Carrigy has said that he is “truly, truly honoured” to be wearing the cathaoirleach's chain, following his election to the position at last Friday's council meeting.

Cllr Carrigy was nominated by his party colleague, Cllr Paraic Brady, who said that the Ballinalee postmaster has “a proven track record” when it comes to working for Longford.

His nomination was backed by Cllr Colm Murray who agrees that Cllr Carrigy has played “a significant role in the formulation of policy” and in “driving positive initiatives in Longford” over the past five years.

Speaking to his council colleagues after his election, cathaoirleach of Longford County Council Cllr Micheál Carrigy said that, as he accepted the chain, he was thinking of his father, Andy.

“He worked for Longford County Council for a long number of years. A lot of the road staff would’ve known him. He was here for 30 years and I know he’s looking down on me today and he’d be very, very proud,” he said with more than a touch of emotion.

Cllr Carrigy also thanked his wife, Úna, and his three sons, Braiden, Odhran and Davin, who have supported him every step of the way.

“I’ve always said that, at the end of every council term, if you can look back and say that you’ve done good, that you’ve improved your community and improved Longford, that you have a good job done,” he continued.

“And now we’re looking forward to the next five years. We have more work to do as a collective council. I believe we have a good council. We have a fantastic management team and fantastic staff throughout the organisation.

“We can continue the work that we’ve done over the last number of years and improve Longford and make it a better place for ourselves and for our families. And that’s one commitment I make here today. I will work to the best of my ability to make Longford a better county for us all.”

“It’s a huge honour for me to take this position. I’ll be there at your side Micheál any time to attend events and to help you in any way I can, so I look forward to working with you over the next five years,” he said after accepting the chain.

“As a group over the past few years, I think we have put our best foot forward for Longford and I hope that we can continue in that trend.

“We might get some bad press sometimes, but we’re spending money, we’re pushing Longford forward and I hope we can continue to do that.”