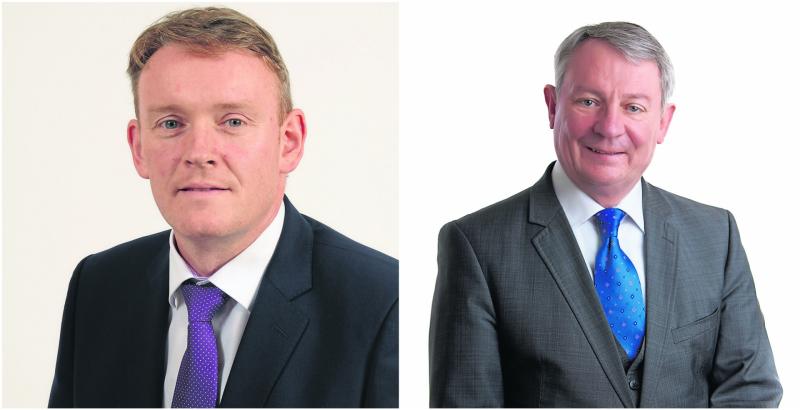 A war of words over the Government’s contentious National Broadband Plan (NBP) has erupted between two local politicians hoping to lead their parties into securing the balance of power of Longford County Council after this weekend’s local elections.

Fine Gael’s Micheál Carrigy and Fianna Fáíl’s Seamus Butler have traded political blows this week after the former hit out at Micheál Martin’s criticism of the plan.

Mr Martin said that Fine Gael’s National Development Plan was "in shreds" given the anticipated €3bn investment which was required and accused the Government of "playing fast and loose" with taxpayers' money.

In a strongly worded statement issued to the Leader this week, Cllr Carrigy took aim at Mr Martin’s comments, saying such remarks represented a “kick in the teeth to the people of Longford”.

He said: “Micheál Martin has confirmed that Fianna Fáil wants to axe this plan.

“If in Government, they wouldn’t sign the contract. Micheál Martin says rural Ireland must wait and couldn’t care less about those without broadband in Longford.

Read also: Irish Rural Link call for the National Broadband Plan to now be delivered as a matter of urgency

“If €3bn is too expensive how much should it cost – the Opposition have never provided a figure, and they have no basis or evidence for providing one.

“The only way to save money is to leave people out, (so) which communities do Fianna Fáil want to leave behind?”

Speculation over the weekend had suggested a drop in support for Fine Gael was heightening fears among senior ministers that the broadband controversy was damaging the party's election chances in urban areas.

For those in opposition like Cllr Seamus Butler, the spiralling nature of the plan was indicative of a government which had lost touch with its core values in being frugal with public monies.

“The track record of this government when it comes to public procurement is absolutely atrocious,” he said.

The local businessman said his party’s reservations over the size and cost of the plan were well-founded, saying government chiefs could learn plenty from the economical nature in which St Mel’s Cathedral was restored.

“The fact we won't even own the network is an absolute disgrace and it's far better to get it right than to rush it.

Read also: Broadband plan saga is a mess of our own making

“We delivered a cathedral for Co Longford for €30m on time and on budget and they (government) just seem to be incapable of grasping the importance of this.

“In fact, very few of those that are in government have any real experience of business and it is really beginning to show between health, infrastructure and housing,” he said.

For those with no political party affiliation, the saga was one which likewise came in for stinging rebuke.

“It it's anything like the Children's Hospital they (Fine Gael) are looking to build, €3bn won't be near enough and to say they will have it in seven years is really ridiculous,” said Independent Cllr Mark Casey.

Cllr Casey, who is no stranger to calling into question the Government's record when it comes to matters concering Longford, said he was not surprised by the growing controversy.

In reserving equally piercing words for Fianna Fáíl's past history in rhyming out pre electoral promises, Cllr Casey used an old 19th century saying in which to reflect his irritation over the fallout.

“This is a typical Fine Gael promise of jam yesterday, jam tomorrow, but no jam today,” he stated.

“It would be more in their line to reopen all those garda barracks they closed and to start tackling rural crime.

“I'm not surprised by any of this to be honest. Their record when it comes to spending public money has been deplorable.

“People aren't stupid. This is yet another cheap election stunt by Fine Gael. It's absolutely ridiculous what is going on.”