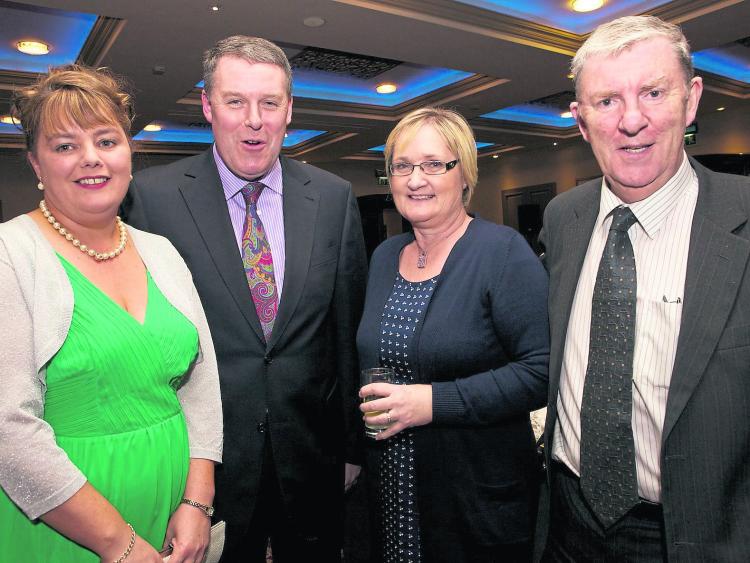 Angela and Ciaran Mullooly with Marian and Eugene McGee at the 2012 Longford Association in Dublin gala dinner Picture: Tony Keane

Eugene McGee was quite, simply one of a kind. A stern, even churlish looking figure at the best of times, here was a man who, as they say, didn’t take fools gladly.

Call him what you will, Eugene was his own man. Intellegent, sincere and exacting, Eugene was one of life's unique characters.

Put simply, he was a man of many talents, a man of great integrity and one of life's true gentlemen.

The untimely and sudden nature of his passing over the weekend has brought with it a deluge of tributes from across the sporting, journalistic and communal divide; a fitting epitaph to a figure who contributed so much to so many in his 77 years.

It’s rare, almost unheard of, that journalists get the opportunity to convey their deepest, innermost thoughts at such times of sadness.

In that circumstance I make no apologies and no excuses as the one person I have to thank is Eugene McGee.

He, like RTÉ’s Ciaran Mullooly so eloquently stated from his own perspective on various media channels over the weekend, gave me my first ‘start’ in journalism.

A start was how it was initially and in no uncertain terms put to me. Though very much matter-of-fact, at least you knew were you stood. There were no grey areas, what you saw was very much what you got with Eugene and I, as a naive, somewhat wet behind the ears aspiring journalist admired him for it.

It was a similar tale of appreciation from two other former Leader staff members, Mairead O’Shea and Ciaran Mullooly.

“I came in in around 1999 or 2000ish,” said Mairead, who later went on to serve in the Roscommon Herald before venturing into politics as a parliamentary assistant.

“It was Eugene and Joe (Flaherty) who interviewed me at the time.

“He placed a great emphasis on quality local journalism and always believed the local newspaper should be voice for the local community.”

Like many others before her and since, the Roscommon native was well aware of her boss’ more austere side, a quirk which was perhaps overlooked in favour of a more compassionate, empathetic virtue.

“He was gruff and to the point and would pull you up if you messed up. But you knew where you stood with him and he had a very caring side that many people mightn’t have seen. He was very decent too and was always very proud of his roots.”

Retired Leader photographer Joe McDonagh was another who spent many years working under Eugene’s wing in the newspaper’s previous home on the town’s Market Square.

“We would have had a few differences over the years but Eugene was always fair and spoke his mind.

“You could never say he was a hypocrite or two faced. He was always up front and straight.”

A blunt, yet mildly comical exchange between the pair over a plant and Joe’s continued nurturing of it inside the newsroom was one which immediately sticks out.

“It was getting bigger by the week and he just came in one morning and went over to it, gave it a quick look up and down before turning to me and saying: ‘It’s getting more like a jungle in here every day.’”

At a crossroads in his own choice of career path, it was with Eugene and the Leader that the Lanesboro man first cut his journalistic teeth.

“At the time I went into the Leader with Eddie Coffey, Jim Gray and Podgy (Padraig O'Brien),” said Ciaran.

“At the time I would have started out doing a bit of proofreading along with a bit of farming.

“Every Thursday after the paper was put out, I would do the account statements.

“What can I say? Eugene was very good to me. He was the man who gave me the opportunity to write.”

And write he did. It would prove to be the start of a blossoming working relationship which saw the Leader cement its position as the go to publication this side of the Shannon.

“Eugene was someone who would come across as a very gruff, shy, quiet man who had difficulty in even engaging with you, but who was someone that once you spent time with him he would almost become a mentor or tutor to you,” said Ciaran.

“He was also the first person I could remember who took on what you would call a real community development role and was probably the first real campaigner for rural Ireland.

“He would have taken up issues such as the closure of garda stations and post offices and he would write front page commentaries on them which were almost unheard of.

“And if you happened to be his target then you had better watch out as his writing would often be scathing and there would often be a trail of blood along the headline.”

One such controversy surrounded the closure of the former County Hospital along Longford town’s Battery Road in 1986.

A lengthy analysis of the decision was penned by the man himself. Inside, an editorial describing the controversy as “bizarre” and brought about by certain politicians voting to further their own “political advancement” was something which still lives long in the memory.

“He campaigned over it when it closed and was bitter over the fact that people had to go Mullingar from then on,” he said.

“Apart from giving a whole new generation of journalists a start, Eugene was a man who stood up for the small man, for rural Ireland and he was fearless in doing so.

“He didn't care who you were, what party you stood for or how powerful you were.

“Longford will miss that, rural Ireland will, we all will.”

A catchy soundbite it may be, it’s one which undoubtedly sums up not just the mark of the man but one of this county’s greatest ever ambassadors.

Thank you for the memories Eugene.