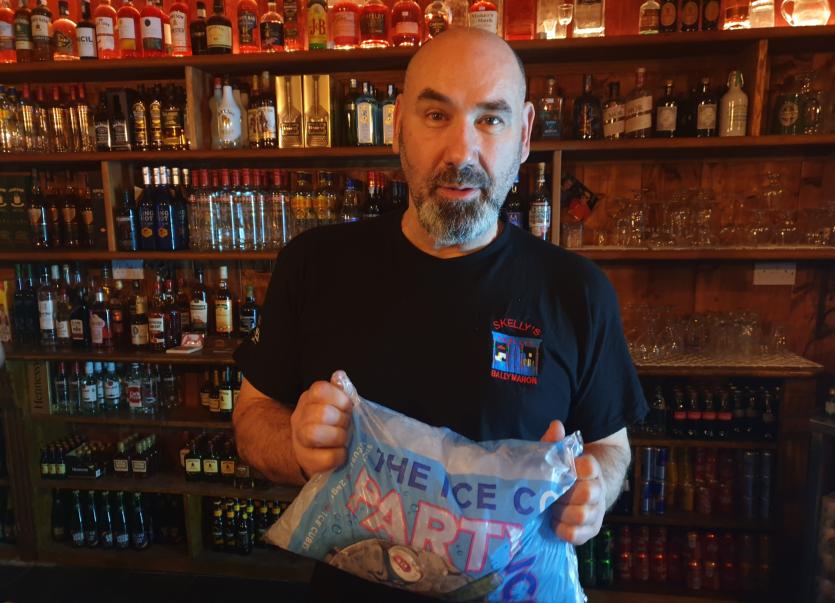 Pat Byrne of Skelly's pub, Ballymahon is forced to buy large amounts ice to ensure the safety of his customers

Local businesses are under pressure to supply water in south Longford as the boil water notice remains in place until further notice.

Local publican Pat Byrne of Skelly's Bar, Ballymahon, has said that it's a major inconvenience.

“We had a very busy weekend and the weather was good so we needed lots of ice,” he explained.

“We had to buy a load of ice and we had to keep it in. We had to warn people against coffee because it doesn’t come out at boiling point so people stayed away from that. It’s just a huge inconvenience.”

Read also: Irish Water do not know when south Longford boil water notice will be lifted

Ceire Duffy, manager of Duffy’s Supervalu in Edgeworthstown, noted that the boiled water notice has led to a dramatic increase in bottled water sales.

“We have sold a huge amount. We have had to source water from the local Cash and Carry. People are just getting on with it, they have no choice,” she said.

Trevor Partner, manager of Finn’s filling station in Ballymahon, says they have also had to source extra water, with sales having increased by at least a couple of hundred percent.

“We have had to get in extra pallets of water from Musgraves and other suppliers and we are definitely selling a lot more than we usually would.

“People are buying between two and ten five litre bottles at a time. They are buying in bulk,” he said.

Mr Partner explained that the boiled water notice has also had an effect on deli preparation in the establishment but says that, like the rest of the community they are getting on with it.

“There is a huge volume of water moving, it is not what we anticipated,” he said.

“We have to order two or three days in advance and anticipate and hope we are getting it right. We received an order of two pallets of water on Thursday last and they are effectively gone at this stage. There are 48 twin pack cases on each pallet!”