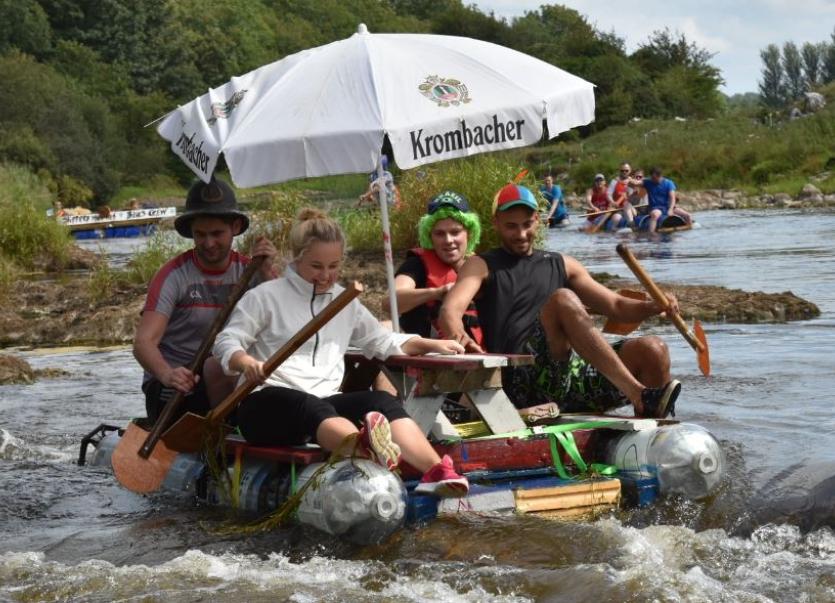 Ballymahon Raft Race 2018: One of the rafts that made its way down the River Inny last August PHOTO: SEAN CLANCY

It's been a while since the south Longford town of Ballymahon has had a proper street festival of its own but this July, the Ballymahon Music Festival will see plenty of family activities take place over the course of a weekend.

And, if the weather is good, it's bound to attract thousands of people to the streets - all in the name of the craic.

It all comes on the back of the hugely successful Ballymahon raft race, which took place in August last year.

“We’re doing it off the back of the raft race last year because there were only a few of us organising that and we were only doing it for the craic. But it went so well and people really enjoyed it,” organiser Jenny White told the Longford Leader last week.

Tyre tubes, pallets, picnic tables and all sorts of paraphernalia were stuck together to make rafts of all shapes and sizes and teams of four made their way down the river Inny, braving the rapids and the fireman's hose all in the name of fun.

And, while the raft race will certainly feature in the weekend-long festival taking place this summer, organisers are aiming for something bigger and better.

But that needs funding and organisers are planning a spectacular Queen of Ballymahon event on Saturday, May 4, in aid of the festival.

In Pictures: Drag Queen of Longford

“There will be ten lads from around Ballymahon dressing up as women for the night,” said Jenny.

The event takes place in the Loft, in Cooney's Hotel and, due to limited seating, tickets are already selling out. They can be purchased for €15 at Jenny's Flowers and Gifts.

“Judges include Luke Norton, who is a milliner from Granard, and a very glamorous lady from Forgney called Penny Quinn. And there’ll be a third, surprise judge,” said Jenny.

“We had a drag queen show three years ago as a fundraiser for the fleadh and there was a good crowd and they all really enjoyed it. Some of the lads did really well - a little too well even,” she laughed.

“But people loved it, so it’ll be great to bring it back.”

Details of the Ballymahon Music Festival are still being fleshed out, but it promises to be an enjoyable weekend.

“The festival itself is taking place on July 13 and 14 - that’s a Saturday and Sunday,” said Jenny.

“On the Saturday, we’ll have the raft race and that will coincide with the Tidy Towns BBQ. And then on Sunday we’ll have a family cycle, tug-o-war and all that kind of stuff. There’ll be music on the streets both nights.

“The last street festival in Ballymahon was about 20 years ago and it used to be based around drinking, but now it’s grown up a bit and it’ll be based around family, community and integration.”

For details of the festival itself, see Ballymahon Music Festival 2019 on Facebook. More information on the Queen of Ballymahon can also be found on Facebook.

“The raft race is open to everyone and you can see Facebook for details closer to the time,” said Jenny.

“It’s a bit of craic. It’s all in the name of fun and bringing people together.”

Pictures: The craic was mighty on the River Inny for the Ballymahon Raft Race