Longford clubs take the silver and gold at the Foróige awards 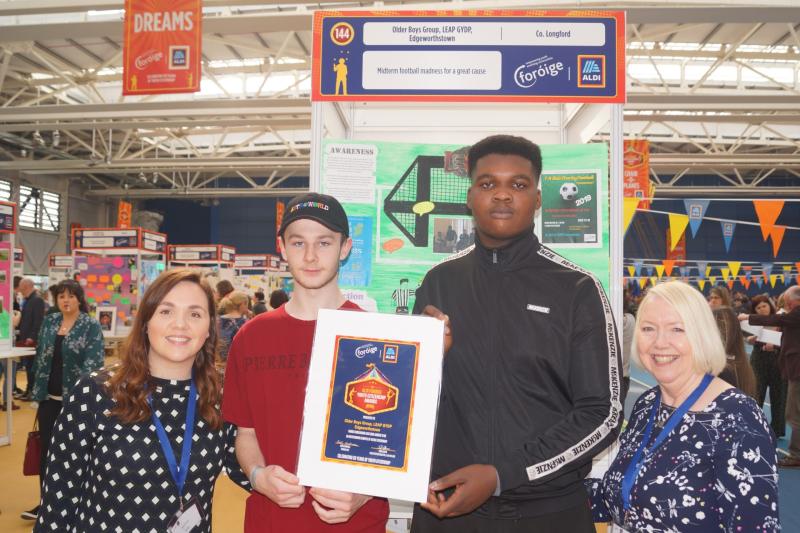 This year marked the 50th anniversary of the Youth Citizenship Programme, which was first run by Foróige in 1969. 2019 has been the biggest year for the programme ever, with over 14,000 young people taking part.

More than 2,000 young people, representing every county in the Republic of Ireland, descended on the National Sports Campus in Dublin to celebrate and showcase their community action projects. Over 220 youth groups took part, having worked on Citizenship Projects focused on improving the entrants’ local communities in areas such as equality, homelessness, climate change, social inclusion, community events, mental health and culture.

Five separate projects from within Longford county were awarded for their efforts, with Ballymahon Foróige club winning a Gold Award for their project to raise awareness of the endangerment of orangutans due to the palm oil industry. After becoming aware of the endangerment of orangutans because of the palm oil industry, the young people of Ballymahon Foróige undertook a project to highlight the issue.

They decided to create a presentation that they could give at primary schools in the area. They researched the issue, designed the presentation, and contacted the schools to organise time to go in and give the presentation. They also created posters for teachers to hang in classrooms.

Edgeworthstown Foróige Club were honoured for their intergenerational volunteering project. The group helped make a contribution to their local 'Manor' nursing home by volunteering and spending times with the residents. They chatted, sang some songs and organised some activities for the residents. They hope to donate a bench to commend the nursing home for the service it provides.

The Edgeworthstown Older Boys group felt that there wasn't enough for young people to do locally, so they decided to organise a football tournament and fundraiser. The boys chose the Irish COPD Foundation to donate the funds to as they had helped their relatives when they were ill. It was the first tournament the boys had organised and it was very successful. They hope to have another one in the summer.

Longford Comhairle na nÓg noticed that there was a lack of awareness among young people about the mental health facilities, and other services, available to them in the community. They created a questionnaire to distribute in schools locally to gain a better understanding of the opinions of young people living in the area. The group then decided to organise Comhairlecon, which was a conference for young people, to highlight the services available to them.

The TY Foróige Club, Attic House Teen Project group were approached by local young people who felt there was a need for a bus shelter in the area. Although facing a lot of work and planning, together they then set out and organised a fundraising dinner dance for transition year students. They made it a good night for those attending, while still making the money necessary for the bus shelter. The implementation of the bus shelter has benefited the whole community.

Commenting at the Awards, John Curtin, Aldi noted, “Aldi’s partnership with Foróige is one that we are very proud of. This is the 5th year we have been involved in the Youth Citizenship Awards and over that time the programme has gone from strength to strength, with the number of entries growing each year.”

“Through their projects, the Foróige members raise awareness for homeliness and mental health, promote areas such as road safety and animal welfare and made the everyday lives of those in their communities better.
“It is absolutely inspiring to see what young people can achieve when they work together and for the benefit of their communities.”