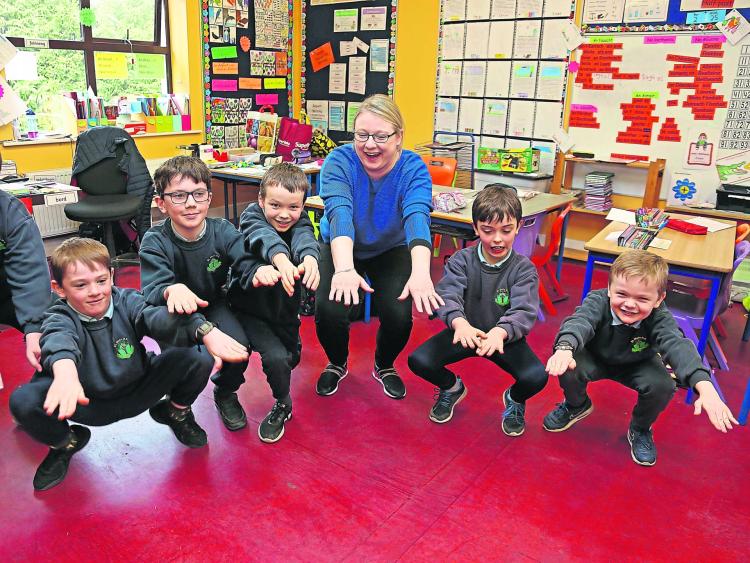 Artist residencies are all about supporting the artist and enabling them to create the work they want to create. But Backstage Theatre's new artist in residence Maisie Lee is all about helping children to create, and has been visiting schools in the county to introduce pupils to all aspects of theatre.

With the help of actress and playwright Fionnuala Gygax, Maisie is working on a project called Luminaria, giving children the chance to have their say on how the performance should look.

“Fionnuala and I are interested in making work for young people that involves them in the process, so it’s not just us deciding what will work really well for the children; their ideas actually feed into the development process,” Maisie explained.

The pair are doing a series of workshops in St Matthews' NS Ballymahon, St Mel's NS Ardagh and St Michael's NS Longford, which involve the children in every part of the process, ensuring that the final performance is not only one created for the children, but also one in which children have had an input.

The play will then be finished by professionals here in Longford and if it's a success, it will be toured to various other venues around the country.

“This play is a window into the creative process from the beginning of an idea to seeing something on stage. I think quite often children might get a bit of that - either putting on a play or writing a story - but actually to get to follow the journey through is very useful,” said Maisie.

In a similar manner, the girls did the Velveteen Rabbit last year and Fionnuala did some workshops with school children, followed by a “work in progress” to show the children how the play was shaping up.

“I think for the children, seeing the ideas that we've done in workshops on stage was really useful, even knowing that what they were seeing wasn't finished,” Maisie explained.

Read also: Hit play Wake in the West back in Longford by popular demand

“So then we had questions and answers with them afterwards, asking them ‘is that what we imagined and if we were to do it again in the full version, what would we do next?’ So it’s all the steps along the way.

“Loads of them, when we asked them, are very interested in writing stories, so it’s just using that in a different form.”

Fionnuala agreed, adding that, while some of the children don't have experience in theatre or drama, storytelling is something that will be familiar to everyone.

“A lot of them probably would understand what it means to write a story because they’ve done it in school. So we’re taking that form and showing that you can write a story and make it into something else,” she remarked.

It’s a very unique idea and one that is quite new in Ireland, teaching children the language of theatre and showing them that their input as children is as valid as ours as adults.

And general manager of the Backstage Theatre Mona Considine is thrilled to be bringing such a new and inspiring project to Longford through the Artist in Residence programme.

“To have that insight into the children’s interpretation of the work or reaction to the work or response to the work is really interesting to see. I think it’s great that they’re involved in some way in the making of the professional work for their own age group, however small that is,” she told the Leader.

“The sharing was done with no set, because it was just a sharing of a work in progress. But they were asked what they thought should be in the set and what would they expect to be there. And their answers were really interesting - some things you’d expect and some things you don’t expect, but it’s nice that they’re informing every element of it. And they’re interested as well in the final production.”

It’s a relatively new idea in terms of making work for children’s audiences and young audiences and involving the children in the process, according to Maisie.

“And I think that’s the most important thing about this residency - the children being involved in the process, not just being expected to turn up as an audience member. They’re there from the beginning and they feel an ownership of the work.”

Read next: Making theatre available to everyone in Longford