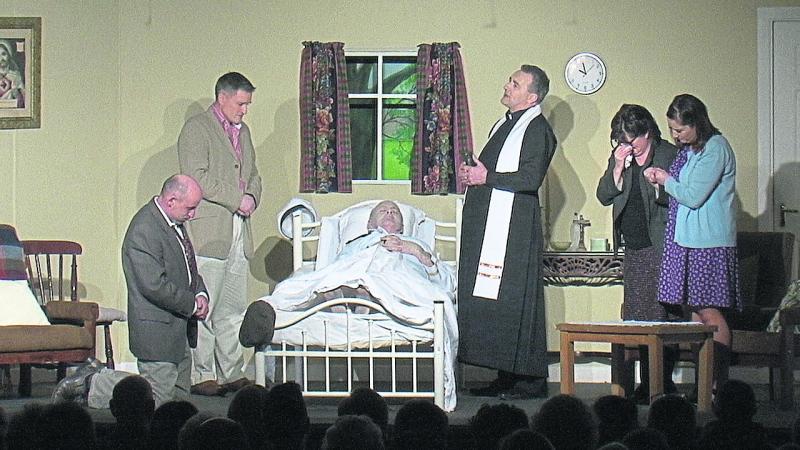 Cilloe Yew Tree Players’ recent performance of Wake in the West was such a success that they have decided to run the play for another night on Sunday, March 24.

Such was the demand for tickets that additional seating was required on the final night of the play with a number of patrons being left disappointed as they were unable to attend. Not wanting to disappoint, it has been decided that the Cilleo Yew Tree Players would run the show for one final night with the proceeds from the performance going to the Killoe GAA Club.

Director Mickey Kenny thanked his cast and crew for making this “one of the most memorable and enjoyable performances” he has been lucky enough to be part of. The plot centres on the wake of Tom Healy, a man known to be “fond of a drop” Tom’s controversial last request threatens to humiliate his family and make them the laughing stock of the small fishing village in which they live.

Not exactly an avid church-goer, Tom’s dying wish flies in the face of traditional religious ceremony in 1970s Ireland.
The local priest Fr Cassidy and Dr John need to be consulted, as does Tom’s son Martin, who returns from New York for the funeral, eagerly awaited by Joan (Joanne Dunne) a neighbour who has held a “candle” for Martin since his departure to the States.

When conniving neighbour Rose calls to pay her respects, the mayhem really begins and her antics set in motion a sequence of hilarious events. Barney is Tom’s life-long friend and drinking buddy who volunteers to carry out Tom’s last wishes, but is the village drunk the best man to carry out the job? Margaret is Barney’s long suffering wife who has to cope with the trauma of witnessing Rose’s carry-on.

Mickey Kenny has expertly guided his cast over the past months. The part of Tom Healy is played by Tommy Mollaghan, Mairead Moorehead plays Tom’s daughter who has dedicated her later years to caring for her “awkward” father in the absence of any support from her brother.

John Fitzsimmons plays the part of Tom’s son Martin the returned “yank with the twang”.Joanne Dunne takes on the role of Joan, the lovelorn neighbour to the Healys. The doctor entrusted with Tom’s last wishes is played by Ollie Keogh. Barney the “village drunk” is played by Colm Hughes with Mary Mahon in the role of Margaret the other half of the antagonistic couple.

The conniving neighbour Rose is played by Carmel Kennedy. Paul McCarthy plays the role of the local priest Fr Cassidy who attempts to bring an air of calm to the chaotic atmosphere.

Wake in the West will return to the Ennybegs Community Centre on Sunday March 24. Doors open at 7.30pm with curtains at 8pm. For tickets contact the booking line by text at 087 2911994.