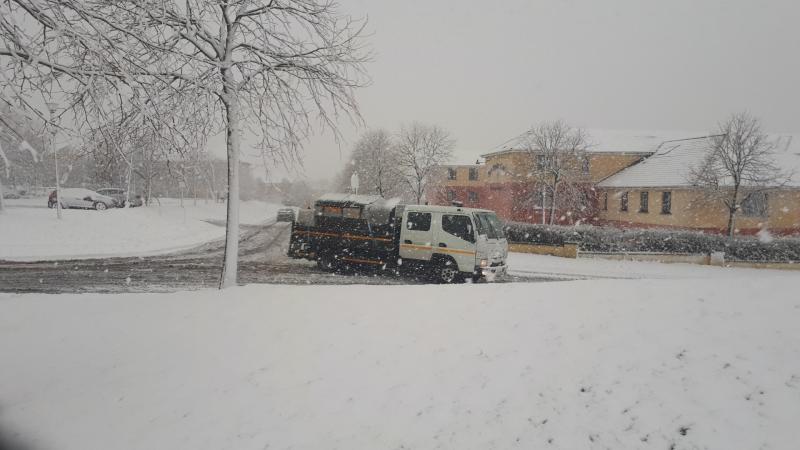 A snow ice weather warning has been issued by Met Éireann for all of Ireland.

The Status Yellow alert forecasts scattered thundery showers of hail, sleet and snow. The forecaster is also warning of poor visibility, with slippery and icy conditions at times.

The warning was issued early on Saturday morning. It is valid from 11pm on Saturday night, March 9 to 6 am Monday morning March 11.

Met Éireann forecast issued at 9.35am on March 9 as follows:

TODAY - SATURDAY, MARCH 9
Very windy and blustery for a time this morning in fresh to strong and gusty westerly winds, falling off this afternoon. Dry for much of the day over the southern half of the country with sunny spells, however, showers will continue further north, prolonged with the risk of hail in Ulster this morning, before becoming isolated this afternoon. Clouding over from the southwest later today with rain pushing in towards evening. Highs of 7 to 10 degrees, but 5 to 7 degrees in Ulster.

TONIGHT - SATURDAY, MARCH 9
Rain, with some heavy bursts, will spread up over much of the country this evening and early tonight, turning wintry with some falls of sleet and snow. The rain, sleet and snow will turn more showery overnight, but still occasionally heavy and prolonged over the northern half of the country. The risk of hail and thunder will also increase towards morning. Lows of minus 1 to plus 2 degrees. Light variable winds, becoming fresh to strong westerly, with gales developing on Atlantic coasts towards dawn.

TOMORROW - SUNDAY, MARCH 10
Tomorrow, Sunday, will be a cold and raw day with widespread and frequent showers accompanied by fresh to strong and gusty westerly winds reaching gale force along Atlantic coasts. Many of the showers will be heavy and wintry in nature with a mix of rain, hail, sleet and snow and scattered thunderstorms. Afternoon highs will be around 3 to 5 degrees generally, but 6 or 7 degrees in coastal areas of the south and southwest.

NATIONAL OUTLOOK
On Sunday night wintry showers will gradually become more isolated and become confined to the west and north overnight. It will be cold and clear with lowest temperatures of 0 to 2 degrees with frost and icy patches.

Monday will start off mainly dry with some sunny spells. Cloud will increase from the west during the day. Rain will develop in the west towards evening and will spread to all areas. Highest temperatures of 5 to 8 degrees with moderate southerly winds, which will gradually strengthen. On Monday night, rain will be heavy in many areas. It will clear overnight with showers following from the west.

Tuesday will be very windy with widespread heavy showers, some of hail or sleet with a risk of thunder. Highest temperatures of 7 to 10 degrees with strong, gusty westerly winds, reaching gale force along western coasts. It will continue very windy and showery on Tuesday night.

Wednesday will continue windy and showery with strong northwest winds, which will ease later in the day and on Wednesday night. Highest temperatures of 7 to 10 degrees.

Thursday will be mostly cloudy with outbreaks of rain and not as cold with highest temperatures of 8 to 11 degrees.

Friday will be a colder blustery day with sunshine and showers. Highest temperatures of 6 to 9 degrees with fresh, gusty westerly winds.

At the moment it looks like next weekend will be cold and showery.