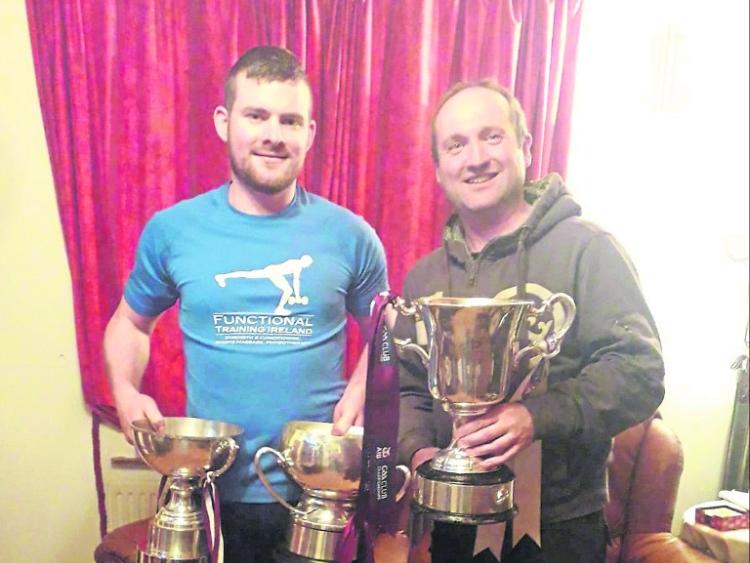 In the words of ‘Matt the Thrasher’ in Charles J Kickham’s Knocknagow, Mullinalaghta achieved the almost impossible dream of winning the Sean McCabe Cup for ‘The Little Village’ against a club with a membership of 10 times its population!

A well-taken penalty by Gary Rogers sealed this famous victory.

This huge achievement made headlines on national newspapers. radio and television news programmes, as well as several chat-shows; players and their manager were interviewed on Morning Ireland, Today with Sean O’Rourke, The Late Late Show, RTÉ Sports Awards and many other programmes.

Ciaran Mullooly, RTÉ midlands correspondent, reported from the celebrations, bonfires blazing along the route, as huge crowds welcomed the champions home to their native place.

Mullinalaghta was part of the medieval territory of Annaly, largely the modern County Longford.
Ecclesiastically, it was under the abbey of Inchmore in Lough Gowna, founded by Saint Colmcille in the 6th century. In the civil parish of Columbkille, and part of the same Catholic parish, it joined with Scrabby in Cavan in 1839.

It is mainly an agricultural area: dairy and cattle farming and sheep farming predominate. It is noted for pastoral walks, picnic areas, attractive scenery, and a combination of rolling drumlins, lakes and woodland making tourism important in the area, with Lough Gowna and the river Erne being noted for coarse fishing.

It is probably a safe bet to suggest that tourism in Mullinalaghta has been given a great boost with the capture of the Leinster title!

Placenames encapsulate a richness of place and embody characteristics of local geography, topography, traditions and religious foundations which retain the original meaning of their location.

They give us a wonderful insight into the heritage and culture of past generations. I was curious about the name and a little ‘research’ provided some interesting facts.

Mullach na Leachta, in Irish, means Hill of the Standing Stones (or gravestones), a name derived from a hill in the centre of the area which was the original site of the local church. There is a lovely musical ring about the Irish name of this half-parish in north-eastern Longford.

In this context, Kate Fennell writes in a 2004 publication, Who needs Irish? writes about the importance of the Irish language:

“Passed on from our ancestors, it is ingrained in the crevices of monastery walls, Viking ports, Norman castles, thatched cottages and even the luxury duplexes… Every hillock was baptised by the people who lived and worked the land for hundreds of years.”

No doubt, the Mullinalaghta players take inspiration from the richness of names in their native place, giving them energy and pride when they represent their club and community for the glory of ‘The Little Village’.

Mullinalaghta and its townlands of Clooneen, Derrycassan, Kilmore, and more, evoke images of people who have threaded, toiled and tilled the land for generations, images which mould the psyche and build the self-confidence displayed by the players in the Leinster final.

If this team slays another Goliath in Thurles, the birthplace of the GAA, in the form of another Crokes, the Dr Crokes club from Killarney, on Saturday, February 16, they will have written another chapter in the story of how a small club can, metaphorically, conquer Everest.

The players will mull over this possibility as they give all for their club, half-parish, family, community and county. Their ambition of playing in the All-Ireland club final in Croke Park would be a dream come true; and if that happens, they may well return to Mullinalaghta, the Hill of the Standing Stones, or gravestones, Andy Merrigan Cup in hand, on St Patrick’s Day.

And should that happen, captain Shane Mulligan, in a sporting tradition, may well bring the cup to the local cemetery and place it on a leacht, or gravestone, in memory of those players who wore the maroon and white of Mullinalaghta when the possibility of winning a Leinster title was a far-off dream.

Now, that’s something to mull over!