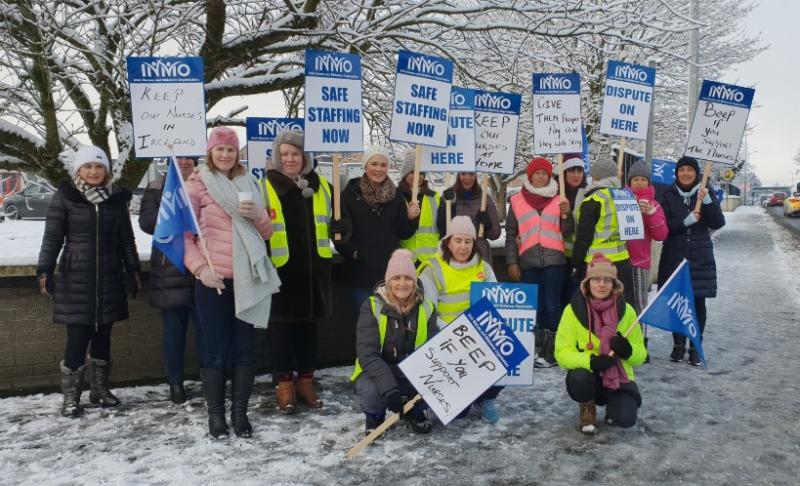 Nurses and midwives on the picket line outside St Joseph's Hospital early this morning.

It may be freezing hard out there, but the cold certainly hasn't stopped nurses and midwives from across Longford from mounting a strike picket at St Joseph's Hospital this morning as part of the all-out industrial action.

Dean Flanagan is the INMO Industrial Relations Officer for the Midlands and spoke to the Longford Leader this morning regarding the need for strike action.

"It's a case of nurses and midwives not having any other choice. There's no clear message coming from the government. Pay is only a small bit of the strike action today but nurses are the lowest paid degree graduates," he said.

"We've had great support from abroad in Australia and Canada and England. There's a lack of respect coming from the government and comments about threatening jobs in the economy due to Brexit are not helping.

"Everyone is up for the strike action. There are two things it's boiling down to: recruitment and retention. We need to keep our nurses here in Ireland. And equality with allied healthcare professionals.

"Strike committees have been active since the crack of dawn this morning and we've had the support of the public. Even the patients understand why this is being done, because they're seeing what's going on day in, day out.

"There is no section within the HSE that is immune to the mass exodus from this country. We need to provide for who is going to care for the future. We need those people in the future to look after the most vulnerable in our society and that is why we're striking today."

No snow will freeze the passion these nurses are showing for their cause #StandWithNursesAndMidwives #NursesStrike #snow #longford pic.twitter.com/pFxntHU23r

So far there has been an incredible show of support for Longford's nurses and midwives, all of whom have wrapped up warm and driven in snowy and icy conditions to be there today.

Also read: Met Éireann warns of treacherous weather with snow and temperatures dropping like a stone

Members of the public are beeping their horns as they pass and many are stopping with tubs of hot sausages and other food to keep the nurses warm in these freezing temperatures.

As someone with Cystic Fibrosis I see the long hours the nurses work, the stress when they are understaffed, the brave faces when they have to come to my room after another patient has died, the tea & toast at 3am, overworked & underpaid. 100% support as they strike 2day #nurses pic.twitter.com/wd0ldaWjoE