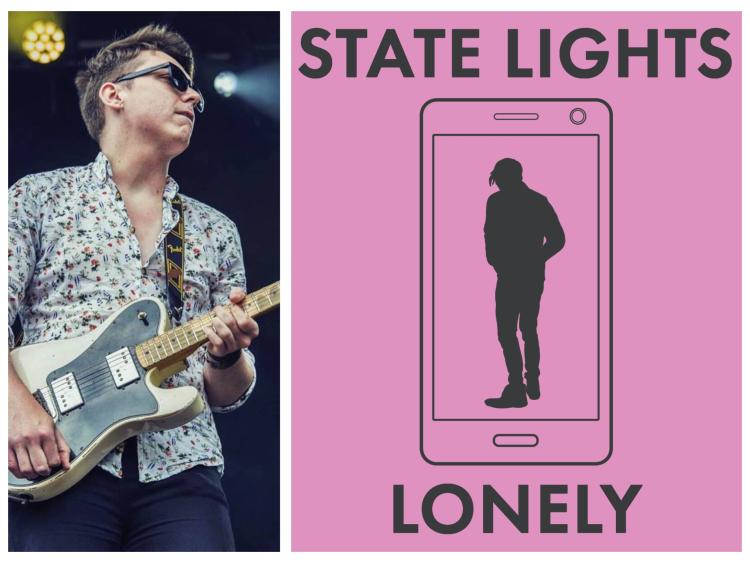 They've been compared to the likes of U2, George Michael and other superstars in the music industry, but Irish band State Lights have really found their own sound in the past year or so and nothing proves that more than their latest single, 'Lonely', which will be released on Friday, February 1.

Last year, State Lights received an incredible response to two singles, 'Peace Will Come' and 'Freedom', both of which had spectacular music videos to boot.

And there's something very different about this particular single, which is definitely one of their most unique and catchy original songs to date.

It's got more of a pop feel to it, and yet it still has that trademark State Lights sound that this reporter simply can't get enough of - not to mention the unequalled voice of frontman, Shobsy (Shane O'Brien).

“One day in rehearsals, Shobsy asked if he could play us a song he had written, partly inspired by Kygo, who he had seen in concert a few nights prior,” said guitarist, Joe Regan.

“At that time, it had a very laid back, almost reggae feel, which isn't our sound at all, but we still liked the idea and the melodies Shobsy had written. Over the course of a few months, we found our sound within the song.”

Sonically, 'Lonely' is more experimental than any other State Lights song to date, with Joe putting down his guitar to take up the piano instead.

The band also played around with some vocal effects like pitch-shifting and auto-tuning on Shobsy's voice to create the very unique and interesting refrain that makes the song so catchy.

“It was a very interesting musical journey to go on, but we couldn't be happier with how it sounds,” said Joe.

“Lyrically, the song is from the point of view of someone experiencing depression, bordering on an existential crisis. In the past year, we became very much aware of the importance of mental health, both of ourselves and the people we care for most.

“It's a topic of conversation that the whole world is starting to take part in more and more as each year passes.

“There'd been a stigma surrounding it for generations, especially in this country but, thankfully through the work of many great organisations like Samaritans and Mental Health Ireland, that stigma has really been broken down."

The song certainly reflects the inner turmoil that people of all ages can feel at various stages in their lives, with beautiful opening lines like 'when will this feeling end' and 'when will my life get better' that are so relatable, you might want to play this song on repeat.

But, despite its subject matter, this song isn't all doom and gloom - not by a long shot. Rather, it's catchy, has a beat and it's as good as, if not better than any pop song you'll hear on your radio today.

“I think that social media has had an inadvertent effect on a lot of people's mental health. We live in a time where everybody is so attached to their phones/iPads/laptops, constantly scrolling through Instagram, Twitter, Facebook. Seeing what our 'friends' are getting up to,” Joe explained.

“Sometimes I think the more you see, the less you know about somebody. I've been caught up in this part of culture as well, and it can really wear your down.

“I mean, is that really what our culture is now? Is this how we live? It's all a bit strange to me. The artwork for 'Lonely' is a reflection of these thoughts."

Social media has given us the chance to stay connected to the rest of the world but, in many ways has broken down the essential communication that we, as human beings, need in order to feel secure.

With this new single, State Lights are addressing the issue of loneliness in a way that draws the listener in from the very first note.

“We've always taken pride in ourselves as a band on the energy we put out and the honesty with which we do it,” said Joe.

“We've gone through dark periods. We've had our ups and our downs. We don't shy away from talking about it. To us, 'Lonely' represents those dark moments.

“'When will this feeling end? Why is this life so lonely?' The sentiment of the song is to not be afraid to talk about these feelings or thoughts you may be having, because communication is the answer."

'Lonely' is the first song that State Lights have not only produced, but also mixed themselves.

All of their music over the last two years has been self-produced in Joe's studio in Granard, but with this one, the lads felt like they had learned enough about the art of mixing that they could give it a really good shot themselves. The result is impeccable.

“It took some work and patience, but we got there, and I think the mix sounds great. We were delighted to get it mastered by Ted Jensen (Gavin James, Green Day, Norah Jones, Talking Heads, Madonna, Billy Joel) as well, who sent me a personal email saying he thought the mix sounded really good and the song was great, so we were chuffed with that,” said Joe.

Mental health discussion is extremely important to us so we are very happy to be involved in this @firstfortnight event tomorrow night in @workmansclub curated by friends @theacademic. Doors 8pm with @inhalerdublin and @truetidesband also on bill! Tickets https://t.co/SrQCh6tzBN

'Lonely' will be officially released this coming Friday, February 1, and will be available on iTunes/Apple Music, Spotify, Youtube and all other online streaming platforms.

“After that we're looking forward to our next headline gig on March 1 in The Workmans Club, Dublin,” said Joe.

“It's our first headline show with MCD Productions, who we're over the moon to be working with.”

Tickets for State Lights' headline gig in the Workmans Club are on sale now via ticketmaster.ie.