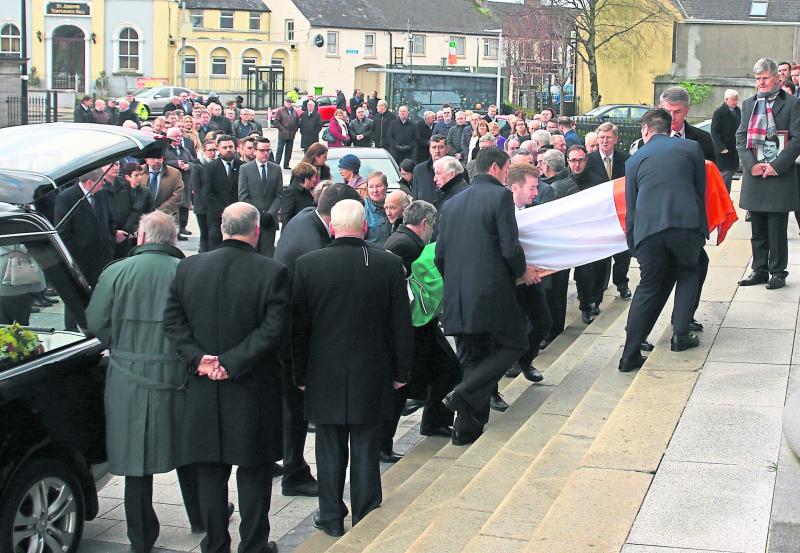 The coffin of the late Peter Kelly is solemnly carried into St Mel's Cathedral for his Funeral Mass last Saturday where hundreds of mourners gathered to pay their final respects.

It was a testament to the late Peter Kelly's character that so many people flocked to St Mel's Cathedral to bid him a poignant farewell on Saturday morning.

Family, friends and colleagues alike made their way from around the county and, indeed, from further afield, to pay their respects and to sympathise with the former TD's family.

And, while there was an element of loss and sorrow in Longford that day - and in the lead-up to it - it was the eulogy by Peter's son, Peter Kelly, that brought a smile, and even a laugh, to the faces of those gathered, as they recalled their own memories of the man himself.

“I remember my grandad’s funeral, Joe Kelly. I spent the day beside my dad and before the funeral he said to me, 'I hope today does not become a day of sorrow. I hope today is a celebration of life.

Because that’s what your grandad was all about',” Peter recalled.

“Now I know with a hundred percent certainty that my dad would want today to be a day that celebrates a life well lived. My dad lived a wonderful life. He always believed he was born under a lucky star.”

Peter Kelly Snr, according to his son, had three great passions in his life: his family and friends, Fianna Fáil, and Longford.

“My mother and father were married for 44 years,” Peter continued.

“And my dad absolutely adored my mother. He loved her so much. He always affectionately referred to her as the 'Rose of Castlerea'. He always said she was the best thing that ever happened to him and if he hadn’t met her, he wouldn’t have had anything.

“And no one ever disputed that,” he added, evoking laughter from the crowd.

“He also loved Fianna Fáil. My dad was obsessed with Fianna Fáil. Even two weeks ago as I sat by his bedside, all he wanted to talk about was Joe Flaherty, Fianna Fáil and the local elections.

“Dad was a lifelong member of the party and he would have been FF through thick and thin.

“He loved to tell me stories of going to the FF Ard Fhéis with my grandad, his father in law, Pop Hester.

“His membership of FF greatly enriched his life. He met many great friends locally and nationally through the party and I would like to think that his membership equally enriched the party.”
Peter Kelly also loved Longford and worked extremely hard for its people.

“He loved this town. He was reared here and he lived all his life here. He knew everything about the town,” said Peter Jnr.

“I’m not sure it’s possible for one person to know everybody that lives in a single county. But my dad certainly gave it a go. He tried to meet and greet everyone he could.

“He had two great successes in his life. The first was with Peter Kelly’s Pub on 22 Main Street Longford. In its heyday he had live music seven days of the week and they had big karaoke competitions with Brendan Kearney.

“At that time too he was heavily involved in the Longford Festival and, looking back now, the success and scale of that festival was incredible.

“I’ll never forget the time I saw Jules Holland play free on the streets of Longford on the Main Street. And it’s great to see that festival is back up and running.

“To an outside eye, the work he did as a politician would have seemed mammoth. But to him it was effortless because he loved doing it. He loved making representations and he absolutely did the best he could to get investment into the town and into the county.”

More than anything, Peter Kelly was a family man, and that came across in a big way within his son's eulogy.

“Dad had three children: myself Peter, my sister Emily and my brother Joe. And we all got on like an absolute house on fire. Family holidays really were a laugh a minute. I once asked dad what were the happiest days of his life and he said the family holidays to Achill Island where we used to go down with the Turners, our cousins the Hesters, the Quinns, the Lyons and the Connellans.

“My parents had a great group of close friends and they all holidayed on and off together for 40 years. He really had a fantastic group of friends and he used to always say that old friends were best.

“Dad used to love to bring Patrick through the town, introducing him to people and showing him off. And they would often come into this Cathedral to light candles and say a prayer.

“Dad used to do this thing where he’d point at Patrick and then point at himself and he would say ‘Patrick, what am I?’ and Patrick would say ‘you’re a fantastic man’.

“My four-year-old nephew was right. Dad was a fantastic man. And we all loved him greatly and we will miss him dearly. But we’ll never forget him.

“And I just want to finish, on behalf of my family, by thanking you all for coming here and sharing in this day of celebration of a wonderful life of Peter Kelly, Longford.”