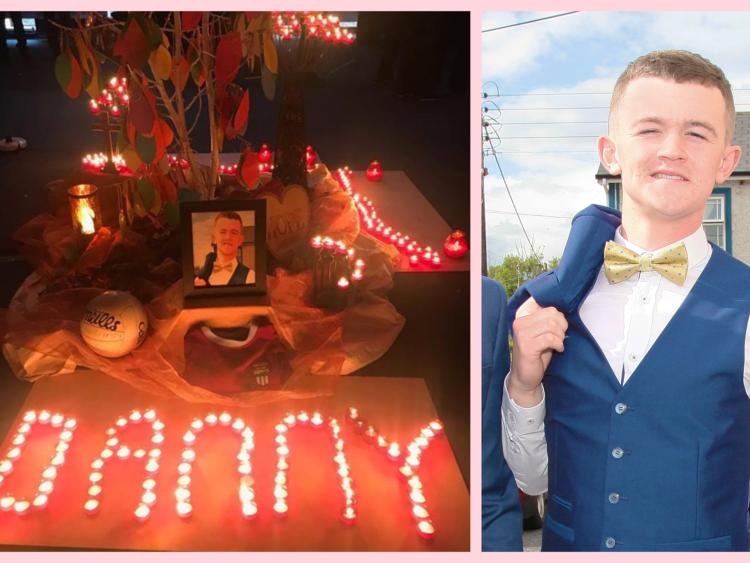 A tribute to the late Danny McGee, taken from Moyne CS Facebook page and right, a picture of the late Drumlish man at his Debs grad.

The funeral of Drumlish Danny McGee has heard how the popular and much loved sportsman had been planning on returning home permanently from the US next year.

The north Longford village was brought to a standstill as mourners turned up in their hundreds to pay their final respects to deeply respected 21-year-old.

Mr McGee died in New York following an alleged assault outside the Gaslight Bar in Queens during the early hours of last Thursday morning.

Members and his former teammates from Fr Manning Gaels escorted the funeral cortege into St Mary’s Church alongside two further guards of honour which were provided by another of Mr McGee’s past stomping grounds, Gaels Utd and Moyne Community School.

Chief celebrant Fr Ber Hogan said words were of little solace to his heartbroken parents Don and Coleen, brother Brian, sister Eva and extended family as the local community tried to come to terms with the events of the past week.

“In truth it doesn’t make sense, it shouldn’t make sense,” he said, in reference to the tragic circumstances surrounding Mr McGee’s death.

“In a society where violence comes to easily we all need to stop and ask ourselves have we by our careless use of words, our outbursts of anger or indeed our uncritical attitude to violence contributed to such a society.

“Have we been hardened by society or has society hardened us?

“No day go by without hearing of some violent act, some tragic death, some family traumatised by a tragic and unnecessary death of a dear one. Have we become too desensitised by their frequency?”

Fr Hogan said despite the evident heartache which Mr McGee’s family and friends were shouldering, he noted how similar anguish was also being felt by close relations of the man charged with his assault.

“We are also conscious today that there is another family dealing with this tragedy and their pain is valid too. In a tragedy like this, there is pain and heartbreak for all concerned,” he said.

Mourners were told that Mr McGee had been looking forward to welcoming his sister, mother Coleen and brother Brian to New York at Christmas before returning to Ireland permanently in the new year.

“Sadly, his homecoming was not the one Danny looked forward to or planned for, nor is it the homecoming Don (father), Coleen, Brian and Eva ever foresaw,” added  Fr Hogan.

Two of Mr McGee’s best friends, Leon McKeon and Niall Heslin gave equally touching eulogies, both of whom opted to home in on the “warm-hearted, honest, caring and loving man” they grew up with.

“Over the last few days I have heard hundreds of stories from people,” Mr Heslin said.

“One person summed him up quite well when he said: ‘Danny had the mentality of a 21-year-old, but he had the wit of a 70-year-old. It didn’t matter what age of a person he spoke to, he was able to communicate on their level.”

After referencing Mr McGee’s deep love for his parents and two siblings, Mr Heslin turned to address his long-time friend directly: “While I had the pleasure of calling you my best friend, you were also my soul mate, my brother.

“I just want you to keep the craic going up there as much as you did down here for us Danny.