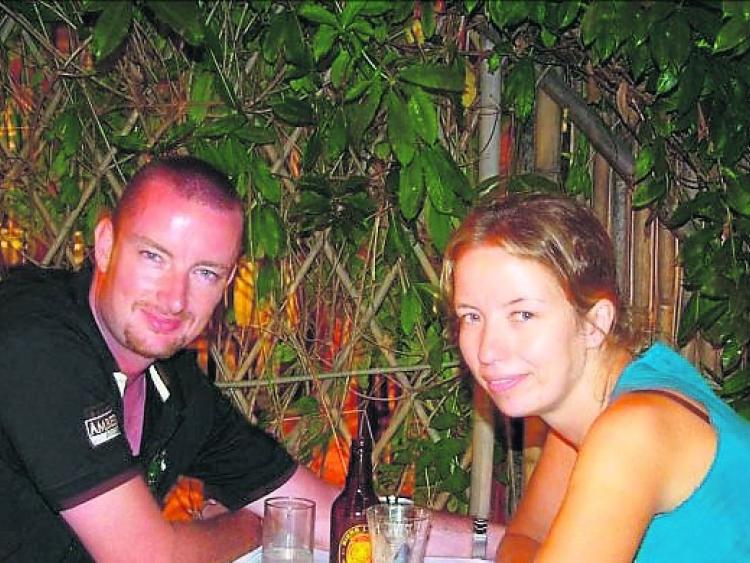 The late Stephen Coyle and his sister Angela, author of this article, having a beer in Mui Ne, Vietnam in May 2005. Totalrecoyle: a weekend for Steve takes place in Granard, from November 16-18, with

Our brother Stephen Gerard Coyle (42) from Cloughernal, Granard, was the apple our family's eye from the minute he was born to the minute we lost him in a motorbike accident in Vietnam at the start of the summer.

He was the baby of the family, and after three girls, our parents had pretty much given up on ever having a boy. He arrived into the world on April 13, 1976, just after we had all moved into our newly built bungalow on our farm in Cloughernal - three miles from Granard, in an idyllic country setting.

Our father, Terry, brought home the good news to us from Mullingar Hospital. He lined all of us up in a row and asked each of us to guess what we thought the new baby was - a boy or a girl?

Of course, along with Dad, we were so excited when we heard that we had a new baby brother. I still remember us all looking up at the hospital's second floor window to see Mum holding up the new baby for us all to see our little brother.

He was named Stephen Gerard, Stephen after a baby that there was a sad story about in the English press, and Gerard after Saint Gerard.

I was the closest in age to Stephen and I immediately began wetting the bed on his arrival! I was not a happy camper to have the attention taken off me, and Mum wondered why Steve was upset when she left the room at times, until she returned one day to catch me poking him in the eye with my finger! I was a cheeky monkey even at three and a half.

From the moment he was born, he never gave our parents or his three sisters a moment's trouble. He was a quiet, happy baby and Mum said she loved getting up to him at night-time to see him smiling up at her from his cot. He loved to play with his cars and toy farm animals outside the back door, and when he started school in Aughnagarron N.S., Mum really missed him. He was a blue-eyed, blond little boy and we, along with everyone else who met him, absolutely doted on him.

Like my sisters, I adored him - once I got over my initial jealousy - and we probably drove him mad, fussing over him. No wonder he ended up moving to the other side of the world!

When I got a perm at the age of 15, I thought I was the bees knees, but he never let me live it down. There were lots of poodle jokes down through the years, even up to earlier this year. I retaliated with some brillo pad jokes about his own mop.

There was a river running along the border of our farm; it's also the border of County Longford and County Cavan and we loved wading over and back from county to county. Catching tiny fish and tadpoles in jam jars was another favourite pastime. Once I dangled my brother upside down over the side of the river and told him I had put frogs down his pants. Poor Steve, he was only about 7 - you could hear the screams out of him docking around the three neighbouring Reilly farms.

When he saw Chris O'Dowd's TV series Moonboy - set in County Roscommon - for the first time, a few years ago, about three girls and a boy growing up in rural Ireland, he said, "That was my childhood completely." He thought Colm Meaney's character's line in it was hilarious,
"No-one gets to bully our boy, except maybe Sinead [the annoying older sister]". He sent me an email saying, "Substitute Sinead with Angela!" As well as being the biggest Liverpool FC supporter ever, Steve was also a brilliant and witty writer, even from an early age.

My two older sisters went to live in London after they graduated, and Steve would write them the funniest letters. They would pass them around their friends to have a good giggle. We always said he should write a book, in the Joseph O'Connor, An Irishman - at home and abroad style. It would have been a best seller for sure!

After finishing in the Convent of Mercy secondary school in Granard, Steve studied electronics in Dundalk Institute of Technology, and worked in a number of electronics companies in Dublin and Italy after completing his studies. Motorola closed in Swords, and he was kept on by Celestica, the manufacturing company taking over the plant. When that too closed it doors a couple of years later, Steve and his mates got their redundancy, and a few of them headed off to Oz, with a few month's travelling through South East Asia on the way out.

Steve brought his Celestica top with him, and always delighted in pointing to the logo and telling people he met that "this trip is sponsored by Celestica". He always made his family, friends and colleagues laugh so much - he had so many one liners, always delivered with a wry smile.

He was 'happy go lucky' and in his element when he was discovering new places and people who were always happy to be in his company.
I remember before he left, and after our father had passed away, he told me that he wanted to live life to the full.

He moved to Vietnam in the summer of 2003, following his year in Australia, and he lived there for 15 years. Having studied and worked in electronics in Ireland before emigrating, he certainly found his true calling when he began teaching English in private schools in Hanoi and Ho Chi Minh City.

Highly respected for his style of teaching, he won numerous awards for the schools that he worked in and his shelf in his apartment reflected this.
Steve arrived in Vietnam pre-recession in Ireland, and it was a time when it was not so common to settle there; most travellers would head to Thailand instead as their natural choice of country to reside in if wishing to stay on in South East Asia.

Steve was highly regarded within the circles he moved in, in Vietnam, especially in the teaching and ex-pat communities, and the outpouring of grief, that followed his sudden passing, reflected this.

Our brother helped many Irish and international newcomers to Vietnam, advised them on living in the country, found them jobs, lent them money if they were stuck - never putting pressure on them to hand it back, and used his knowledge and experience of the country to help them as much as he could. He did this without a second thought and he expected nothing in return.

As he told his girlfriend, Nhung, "Always be nice to people and they will be nice back to you."

Steve died suddenly, following a motorbike accident, in the seventh district of Ho Chi Minh City, close to where he lived, on Friday, May 25 (local time) or Thursday, May 24 (Irish time).

We had no idea how many friends Steve had all around the world, and how loved he was among these friends, as well as his work colleagues - past and present, friends and associates in Vietnam and elsewhere.

The outpouring of grief we witnessed following Steve's sudden passing, reflected the love felt for Steve in Ireland, Vietnam and wherever his friends resided, or where he had travelled to, all around the world.
We were so lucky to have The Kevin Bell Repatriation Trust to assist in getting Steve back home to us safely and speedily on June 3.

Thank you for sharing our news on Totalrecoyle: a weekend for Steve in Granard, from November 16-18, with fundraising for the Kevin Bell Repatriation Trust.

This organisation aims to alleviate the financial hardship of bereaved families repatriating their loved ones - who have died abroad in sudden and tragic circumstances - back to Ireland.

We are delighted to welcome Kevin's father, and co-founder of the KBRT, Colin Bell, to Granard, for Steve's weekend.

You can donate for the KBRT here: https://mydonate.bt.com/fundraisers/stephencoyle
Also see Granard notes on Page 32 and www.longfordleader.ie for information on Totalrecoyle: a weekend for Steve.

Read Also:  Fundraiser to take place in Granard in memory of Stephen Coyle