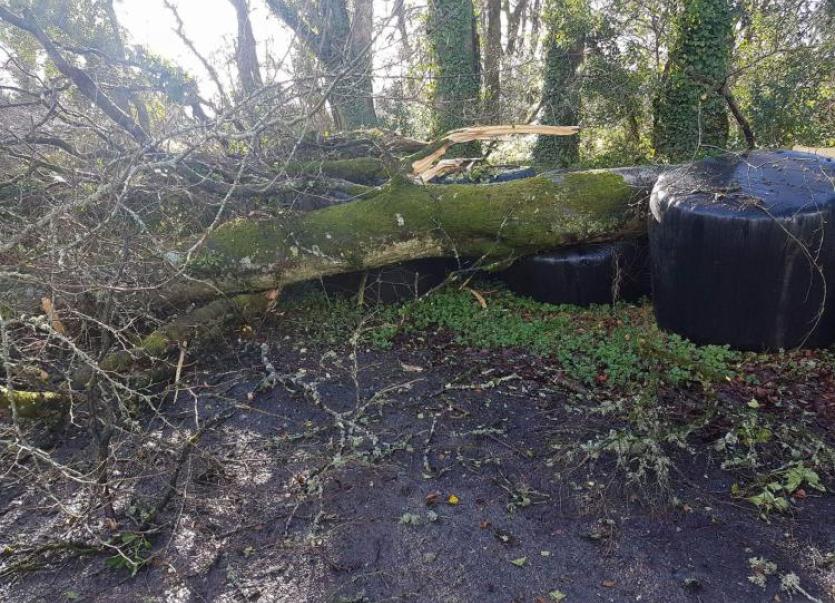 Several trees, together with power lines, were brought down during last week's Storm Ali which left scores of homes and businesses across Longford without electricity.

While the cost of the cleanup in Co Longford following the aftermath of Storm Ali still has to be determined, almost a week later it appears that everything has returned to normal.

Despite that, the storm caused untold damage on farms, electricity supply was lost, trains stopped running and water supplies were reduced across many parts of the county.

Hundreds of homes were without power on Wednesday morning as the Storm continued to rip its path across the country, while more than 700 households saw their electricity supplies cut off as a consequence of high winds and fallen trees affecting power lines throughout the region.

Such has been the ferocity of the gusts, phone lines were also interrupted and Iarnród Éireann confirmed that the rail line between Longford and Edgeworthstown had been closed.

“Due to high winds which resulted in fallen trees and debris on tracks at various locations there is a line closure between Longford and Edgeworthstown on the Sligo Services,” Iarnród Éireann said.

Meanwhile, Irish Water advised its customers on public water supplies in the Granard and Edgeworthstown areas that because of electrical outages as a result of adverse weather conditions, there would be disruptions to water supply and ESB crews were mobilised to deal with the outages.

Heavy winds and subsequent storm damage disrupted the service in more than 60 post offices while mail deliveries across a wide area of the North and North West were temporarily suspended during the height of the storm.

The route from Mullinalaghta to Longford town via Ballinalee was strewn with debris and fallen trees on Wednesday morning as Storm Ali swept in across the country.

A tree was also down on the Lismacaffrey to Granard Road, outside Legan village and on the N4 close to Newtownforbes. Longford Co Council's outdoor team spent the day removing trees from the various routes.

A Status Orange Wind Warning was in place on Wednesday and the local authority advised locals that wind-blown debris was likely to be a problem on secondary roads in particular.