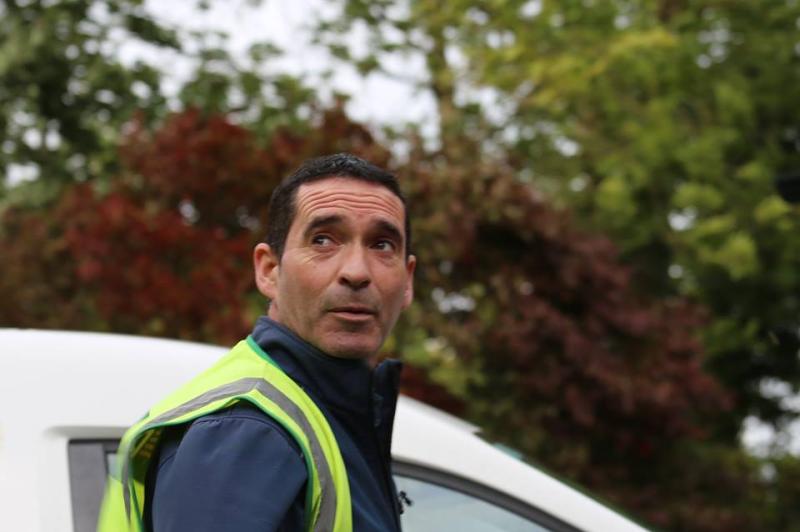 Postman Adrian Monaghan... probably looking at one of the trees "waving like a mad yoke". Photo: Tiernan Dolan; Humans of Longford

"Jasus, it's fierce stormy this morning," were the opening words of Adrian Monaghan when he was approached by Humans of Longford's Tiernan Dolan early this morning. "There's trees down everywhere round here."

The postal service may be disrupted in parts of the country, but it didn't stop this Longford postman from delivering his letters. And he took the time out to speak to the owner of Longford's favourite Facebook page while making one of his scheduled stops.

"There's lads down there with Kevin Mc Goey getting their chainsaws sharpened. They've a lot of work ahead of them today... fair play to them...," he said.

"I'm telling ya... it's worse than Ophelia... They're calling this one Ali... I think it's more Muhammad Ali than Ali Hewson....it has some punch... and it's only status orange... some people this morning were saying to me that it should be red."

Adrian, who is nicknamed 'Mono' if the comments on the latest Humans of Longford Facebook post are anything to go by, then went on to talk about the state of the roads following the storm

"There's trees and branches all over the roads.....look at me lovely uniform....it's destroyed from pulling branches from the road," he said.

"Some day to be delivering your letters... but we're made of good, hardy stuff..."

Letters safely delivered in the midst of the storm, Adrian was quick to get out of there before any more trees came down.

"Holy Moses you've an awful lot of trees around your houses, is it safe at all? Look at that big one there... it's waving like a mad yoke!

Storm Ali may have caused a lot of destruction as it made its way across the country today, but Adrian Monaghan certainly provided the county with a laugh in the midst of it all.