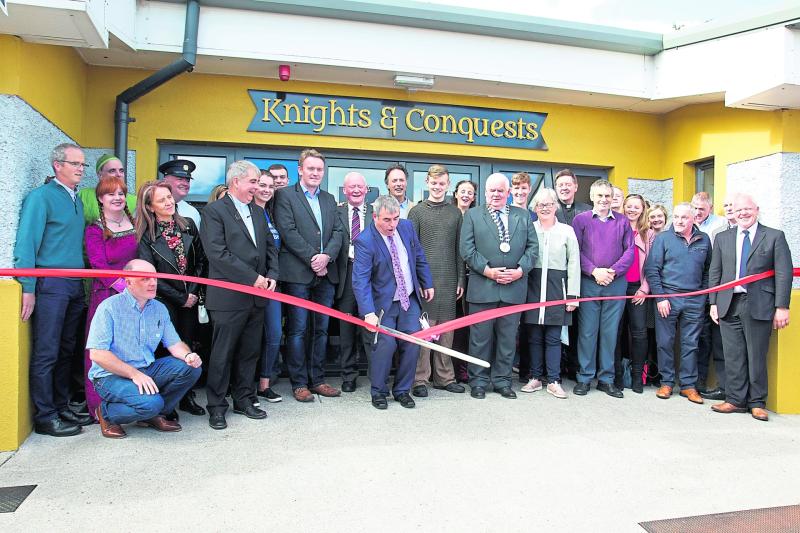 The opening of a state of the art heritage and visitor centre in Granard at the weekend has all the capabilities needed to transform Longford and the wider midlands region’s tourism fortunes for the better.

That was the overriding message of positivity meted out to a crowd of more than 300 onlookers at the official opening of the town’s Knights & Conquests Heritage & Visitor Centre on Sunday.

The visually impressive facility was unveiled for the first time to the wider public some six years after the concept was first contrived by members of Granard Motte Community Enterprise committee.

Minister for the Office of Public Works Kevin ‘Boxer’ Moran carried out the formalities as he paid testimony to the unsung efforts of those behind the centre’s inception.

“Granard Motte is the highest motte in Ireland and, until now, was barely noticed,” he said.
“This will all change over the next number of years.”

The Independent Alliance and Longford-Westmeath TD gave equal credence to the support provided by senior local authority officials to the project.

That, allied to many months of painstaking fundraising initiatives coupled with a €200,000 grant under the EU's REDZ (Rural Economic Development Zone) Programme enabled the venture to turn from theory into one of stunning reality.

“What's good for Longford is good for Roscommon, Westmeath and surrounding counties,” he said, while expressing his confidence in the centre becoming one of the midlands' most important visitor attractions over the next three years.

A fully kitted out educational hub that tells the unique story of Granard's long held association with the Normans, members of the public were afforded a walkabout of its inner confines before being treated to tea and refreshments next door, where it is envisaged a café will open up.

There were umpteen eye-catching features for young and old to revel in with a number of volunteers decked out in Normanesque costumes to greet visitors. For the more youthful observers there were plenty of games and fixtures to keep them amused, among which included mock sword fights and face painting.

Bishop Francis Duffy, and local politicians together with Cathaoirleach of Longford County Council Cllr Luie McEntire was also present, the latter of whom was likewise keen to underline the merits of those behind the centre's initiation.

“This has been some achievement,” said a plainly taken aback Cllr McEntire.

“I got a tour of this facility recently and it really makes you think back to how people suffered in those hard times.

“But days like this don't just come around without community effort and everyone pulling together.”

Following those endeavours, attention has now shifted to developing the second phase of the overall project-a 15 acre heritage and cultural park.

That, though is another day's work. S

unday was Granard's day, a day which typified and showcased rural community life and its very best.