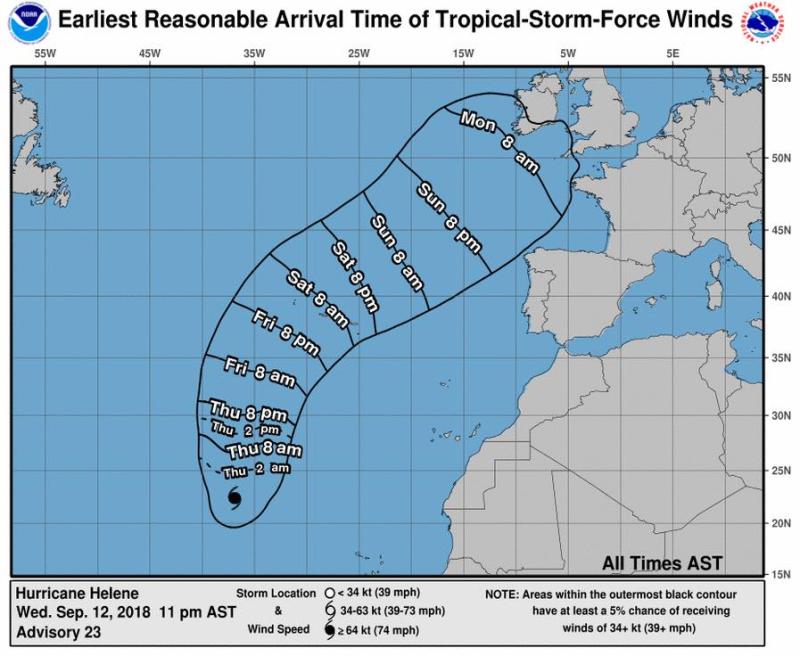 The storm will hit the south west and west of the country early on Monday morning and then make its way across the country.

Cathal Nolan of the Midland Weather Channel has been monitoring the path of Hurricane Helene as it makes its way across the Atlantic Ocean and has issued a severe weather warning in light of his latest findings.

In his latest Facebook post, Mr Nolan said that it looks increasingly likely that hurricane Helene will make landfall in Ireland at some point between 14:00 on Monday and 02:00 on Tuesday next.

"Currently Helene is 2000km southwest of the Azores and remains a category 1 hurricane, with sustained winds of 130kph and gusts in excess of 170 kph. Helene is weakening however and should continue to do so as it crosses the cooler waters of the North Atlantic before impacting Ireland through next Monday/Tuesday," he said.

"The latest guidance suggests that the strongest winds will occur along the south and west coasts, where gusts could exceed 130-140 kph. Overland gusts of between 110-120 are possible. The storm itself is still some time away and therefore it’s exact track and intensity remain difficult to pin down."

And, he added, this particular hurricane is taking a similar path to that of Hurricane Ophelia last year, which he says is extremely unusual for an Atlantic hurricane.

"My concern at present is that the storm could deepen during its approach to Ireland, transforming from a Post Tropical Cyclone into a very powerful Atlantic Storm, which would potentially increase the winds along the west and south coast given the storms angle and interaction with the jet stream."

Met Éireann have thus far released no details of a storm, but stated that weather will be very "disturbed" early next week.

"There is a lot of uncertainty in the details for early next week but indications are for very disturbed weather," said the forecast.

"Mild, very humid conditions are expected to develop during Monday, with rain moving up from the south in freshening southerly winds. There is a risk of some extremely windy conditions with heavy rainfall on Monday night or Tuesday but there is a large degree of uncertainty in details at present."