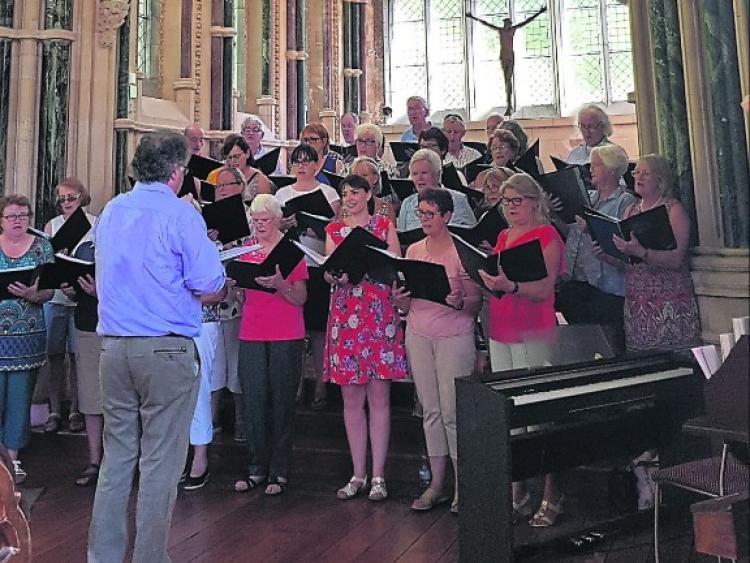 Forty members of the choir took part and the choir was based in the Station House Hotel while there.

Their first recital was at the Gothic Chapel at Kylemore Abbey which is home to a a Benedictine community of sisters. The Abbey and walled gardens are also a major tourist attraction in the heart of Connemara.

The estate was bought by Henry Mitchell, a wealthy English financier in the mid 1800’s and the castle was designed as an elaborate love token for his wife Margaret and their young family. Although born in England he proudly proclaimed that every drop of blood that ran in his veins was Irish.

The programme included a selection of traditional Irish pieces: The Salley Gardens, Molly Malone and Danny Boy as well as some well-known popular compositions i.e. The Prayer/ Lead us Lord, You’ll Never Walk Alone and our signature piece The Olde Irish Blessing.

The large multinational audience greatly enjoyed the performance and afterwards we toured the Abbey and Walled Gardens and later enjoyed a boat trip around Killary Harbour.

On Sunday morning the Choir was invited to sing at Mass in Clifden Parish Church. This Mass was broadcast on Connemara Radio and the choir has received many appreciative messages from listeners since then. The Choir was led and accompanied by our Musical Director, Fintan Farrelly.

In May the Choir hosted the famous De Strandede Hvaler Choir from Copenhagen at a joint concert in St Mel’s Cathedral. This was very well attended and the performance of traditional Scandinavian songs from our Danish visitors was much appreciated. Our new Danish friends had a great time during their weekend in Longford and we have been invited to perform with them in Copenhagen.

Rehearsals for the coming season commence on Wednesday, September 19 at 7.30pm in the Sylvia Dawson Hall at St Christopher’s, Battery Rd, Longford.

The choir consists of soprano, alto, tenor and bass sections. There will be a welcome for new and old members. It is proven that choral singing has many health benefits.