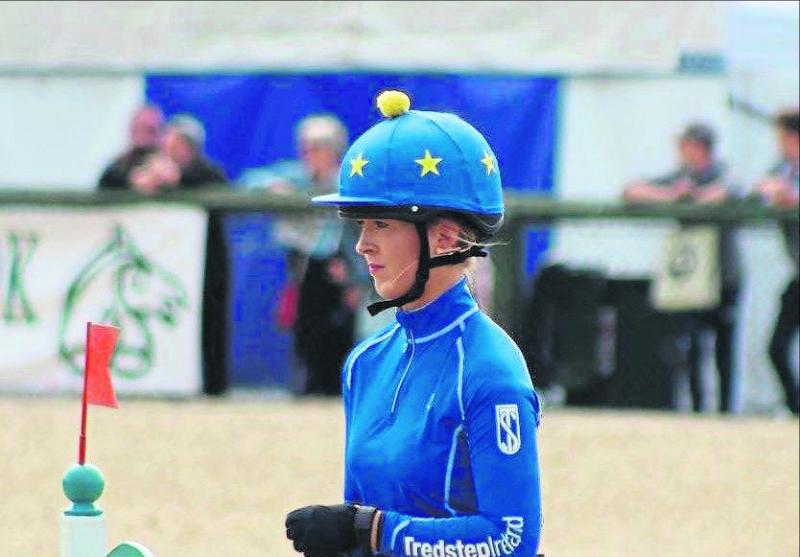 Aisling McGreal: “If Aisling continues as she has ably started, she’s destined for great things in the world of horses.”

The first thing Aisling McGreal said to me when we talked on Saturday last was, “Mammy & Daddy had bought two horses when they got married, so I had been around horses from when I was very young.”

Her memories of being around horses and growing up with horses literally from the earliest times she can remember, left an indelible mark on her.

She got her first pony when she was eight years old, called Bruno, as a birthday present. It came from Mosstown stables, and she immediately joined the pony club.

Her mother - Barbara - knew that it was a great environment in which a novice could learn the ropes, because the pony clubs competitions, put the emphasis on enjoyment, rather than winning.

Aisling described this experience as “learning to be responsible for something else, rather than yourself, and as a child growing up with that, really grounds you, as an adult. Learning to love the horse.”

Two years later she got another called Sparkie. But in 2009 Aisling outgrew both of them, and moved up to Cuddles (Corbeagh Claire) which had been given her by her uncle Ian Heslin, as a foal.

Cuddles brought Aisling to jump Pony Grand Prix’s, and to jump with the Irish team in Cavan in 2013.

Simultaneously, she was competing on Yogi who was donated to Aisling by Carla Lennon, one of her Pony Club instructors.

Following great and consistent success on ponies, she came to the age to start riding horses, and her first was ‘Blaze’ home bred and known as Corbeagh Breeze. On Corbeagh Breeze she competed with great results in 2014 and 2015.

But education was also consuming much more of her time and she made the heavy decision to sell Corbeagh Breeze before entering her leaving cert year. She felt it wouldn’t be right to leave her without proper attention for the whole year.

Concentrating on her studies for the following year, she left the horses aside and focused on learning. She was pursuing Agricultural Science, in which she was deeply interested.

Coming through with flying colours (Aisling didn’t tell me herself, she’s correctly modest and understated in all her endeavours) she is now in UCD in her third year.

After the leaving cert, she came out without a horse, and had to start again, so to speak.

Aisling wasn’t long before thinking of someone she had great respect for, Harold McGahern. She decided to send him a text - which is by far the best way to address something important - giving him time to think it over.
By the end of 2016, she’d been given Kimono Sash (owned by Harold, and Big Blue Nun (also under the control of Harold who stables her for life but owned by Daryl Noble).

Speaking to her, I got the impression that Kimono Sash changed her life.
Literally.

I noted Aisling, saying twice, in passing, that Kimono Sash - who is currently lame from a normal injury - was the horse that “was a dream come true”, and “taught her” an incredible amount.

Aisling has become a sort of protege to Harold, who helps her in every way. At this stage she was jumping heights of 120 and 130.

She is expecting that Kimono Sash will be back for next year.

Last year, 2017, she has competed with another from McGahern’s stables, after Harold presented her with Rincoola Holly Berry. Holly Berry was a brood mare, and with her Aisling competed in her first Grand Prix, after just six months preparation.

She was also on the team that won her first U.K. Championships along with Rebecca Yorke, Rebecca Lyons, and Edel Whyte.

For 2018 Harold had a fine horse, Rincoola Tinntean, but this was only a hunting mare, who had never been in a showjumping arena in her life.

After looking at possible options, Aisling decided that she liked Rincoola Tinntean, and chose her to ride.

Now I never heard of anyone who took a hunting horse and turned her into a showjumper in such a short time. It’s an unbelievable thing to do, something akin to taking a Junior Club Football player, and asking him to perform in that years All Ireland Final!

It’s an amazing achievement and some I’ve spoken to tell me that Aisling is so absorbed, she seems to naturally talk the horses language. In any case, once again she won this years UK Championships, again as a member of the Irish team.

Twice running, for an Irish team to win the event.

On a mare that had never seen jumps in public, in her life.
Factor in the crowd, which can’t be replicated in training, and all the attached bustle that comes with public events. Incredible.

If Aisling continues as she has ably started, she’s destined for great things in the world of horses.

She’ll be present in Ballinalee for the barbeque in Corbeagh House on August 31. We can all see her there!

Aisling had only one thing she wanted mentioned. The great support given to her by her parents, Barbara & Joe McGreal.

Their never ending support for her, for which she feels enormous gratitude.

The barbeque is a fundraiser for Aisling, Aisling Sorohan, Catriona Heffernan (a sister of Aisling’s mother), Cara O’Mahony, Ciara Gallagher, and Caoimhe Brady, being run for Sean Connolly’s OsKaRs.

The maitre’ d will be Joe McGreal, Aisling’s father.