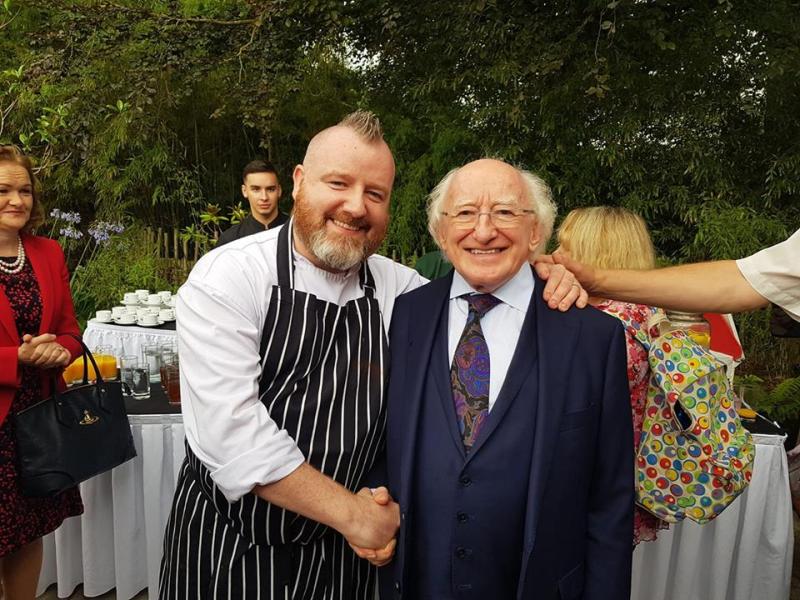 High-end canapés and beverages were the order of the day for President of Ireland, Michael D. Higgins, who attended the official opening of the Dublin Zoo Education Centre on Monday.

And who better to serve them up than local celebrity chef, Gary O'Hanlon?

It's been three years since the last big opening in Dublin Zoo and approximately 400 people attended Monday's event, including the President of Ireland, who was very impressed with Gary's food.

“It was the first time I ever met him or cooked for him and I was over the moon,” Gary enthused on his way home from the event on Monday afternoon.

“I've cooked for many celebrities but I'm a big fan of Michael D. Higgins.

“I think he's been a great president. He's carried himself impeccably since he went into office. And he's a football man like me.

“He said 'so you're the maestro who cooked the food today'. He loved it, or so he said anyway...

“Maybe he said it to make a man feel good about himself - and it worked!”

Food for Thought: Longford's Celebrity chef Gary O'Hanlon reflects on his rise to the top

To top it off, the president's head of security detail, Ronan Mulligan, went to school with Gary.

“We haven't seen each other since the day we picked up the Leaving Cert results. It's a small world,” said Gary.

Gary took his career to the next level earlier this year when he stepped into the new role of Culinary Director at Baxter Storey Ireland.

But, he said, it was good to be back in the kitchen on Monday cooking for Ireland's first citizen.

“It's always nice to be in a chef's uniform as opposed to a suit in a boardroom,” he said.

“That was a really big day for me.”

Longford Lives: Gary O'Hanlon on his career so far