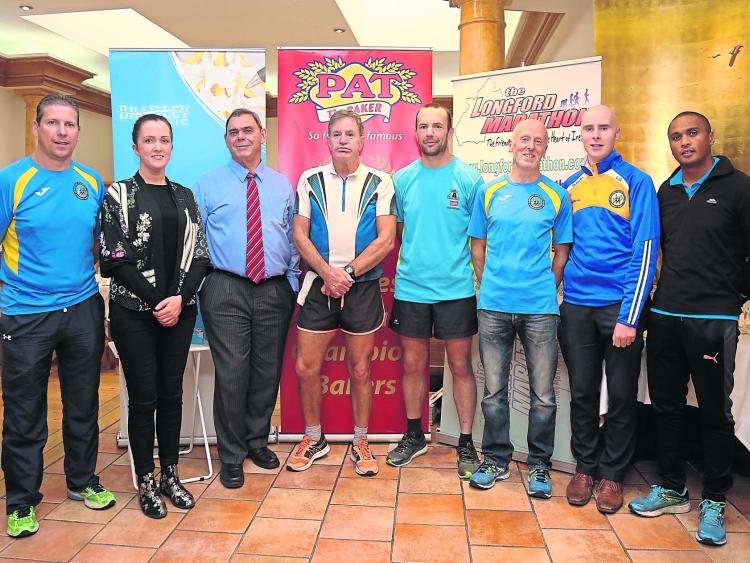 There is more than a fair bit of obsession attached to running.

If you wanted to illustrate this you could point to the four runners, still in their shorts and singlets, flushed from exertion attending the launch of the 2018 Pat the Baker Longford marathon.

That obsession doesn't stop with the athletes. To organise an event with an international dimension, and keep it vibrant for 17 years, requires a certain fixation. Last Thursday the annual shindig to mark the launch of the 'Friendly Marathon in the Heart of Ireland' was held in the Longford Arms Hotel.

Runners, organisers, committee, sponsors and co-ordinators were all on hand to acknowledge the imminent sporting event that attracts huge numbers to the county for one of the most important sporting events that Longford hosts.

The reputation of high standards and the friendly welcome are among the key ingredients of the success of the Longford Marathon and the reason participants return year after year.

Well over 110,000 marathon miles have been covered on the route of the Pat the Baker Longford Marathon since the first run in 2002.

The 17th incarnation of the event had to shuffle dates around to accommodate the visit of Pope Francis to the country, but organisers are hoping that this will not adversely impact on the number of runners.

Mr Meeney, whose company is in its ninth year of sponsorship of the event, said the marathon is of value to the county as it puts out a very positive image of Longford.

Michael said that Pat the Baker was a national brand, but it was also a local brand and the links with the marathon reinforce this.

He told the gathering he was looking forward to supporting the marathon in the future in the way that Longford people support their local bakery Pat the Baker.

The CEO of St Christopher's Services in Longford Derek Scanlon thanked organisers for their generous support of the centre over the last 17 years.

Mr Scanlon said the phenomenal effort of staff in St Christopher's was bolstered by the generous donations of the people of Longford as exemplified by the Longford Marathon's commitment.

Chairman of the Organising Committee Fr Ciaran McGovern recalled the inception of the event in 2002.

He said that a conversation between himself and Liam Fenelon 18 years ago has brought thousands of runners to the county and raised a lot of money for St Christopher's.

The Chairman said that the support of the main sponsor, Pat the Baker, has been crucial for the continued growth of the event: "We are very lucky to have a fantastic sponsor with a significant local and national profile. Pat the Baker has been very helpful since they got involved in 2009."

Cathaoirleach of Longford Municipal District Cllr Seamus Butler said that the Longford Marathon has put Longford on the map and puts out a very positive image of the town and county.

Cllr Butler said it is an example of the community spirit that makes Longford such a great place and it behoves all Longford people to support an event that brings so many people into the county.

This flat course in the very middle of Ireland, runs through the three counties of Longford, Roscommon and Leitrim and is well regarded for its spectacular views.

This year’s marathon consists of the usual calendar of events. The 39.3 mile Ultra Marathon and Marathon Walk start at 8am on Sunday (August 19) and the Marathon, Half Marathon and Relay Marathon all start at 10am with the 5km starting just after 10 am.

Registration is still open for all events. Go to http://longfordmarathon.com/marathon for more details.

If you would like to volunteer at the event, please pop along to one of our volunteers meetings either tonight (Wednesday) or this Friday (August 17) at 8pm in the Longford Arms Hotel.