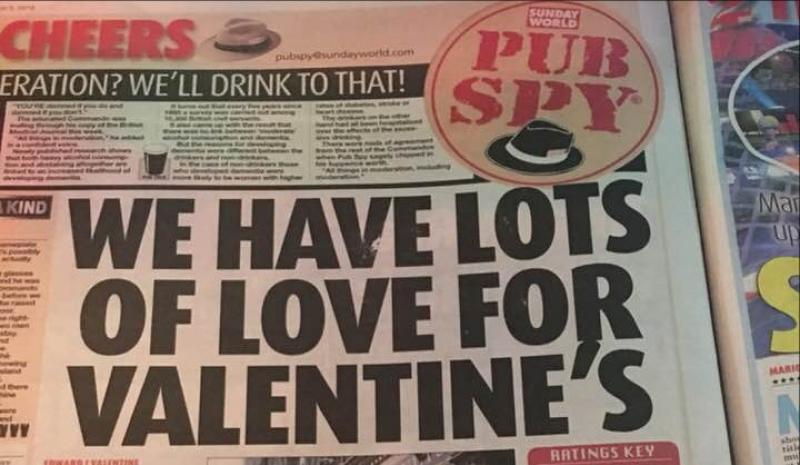 Pub Spy has 'Lots of Love for Valentine's'

The Sunday World’s Pub Spy was in Longford and visited Edward J Valentine’s Bar, Kanes’s Bar, Milo’s and Jack’s Corner House in Edgeworthstown over the past few weeks.

The feature which was run in Sunday’s  newspaper saw the pubs faring out well and in fact so pleased was Eddie Valentine with his write-up, the popular Longford town publican highlighted the fact by sharing the Pub Spy review on his pub's Facebook page.

“Longford is a great town,” he added.

“We had a good time in Valentine’s pub and really enjoyed our few pints,” they added.

“If you’re ever passing through the area we’d recommend calling in for one or two!.”

This latest endeavour seems a far cry from just a few weeks ago when angry business people in the county called for a boycott of the Sunday World after it featured an article on Longford branding it a ‘Terror Town’.

At the time Fine Gael general election candidate and County Councillor Micheal Carrigy said he would decide on whether to lift a self-imposed boycott of the Sunday tabloid following the publication of the article.

Cllr Carrigy took to his own Facebook - after the report which focused on the greater Ardnacassa estate’s anti-social behaviour woes - to vent his frustrations.

The Ballinalee postmaster, who runs Carrigy’s Day Today, vowed to prohibit the sale of the newspaper until such time as a more balanced article reflecting the many positive aspects in the county were given equal prominence.

That came the following weekend when the Sunday World carried an article with Cllr Carrigy accompanied alongside the headline ‘We’re in it for the Long’ haul’.

“I just made my feelings known,” he said, when asked for his take on what had been published in the newspaper.

Cllr Carrigy would not be drawn, however, on whether he would return The Sunday World to his shelves, saying he wanted to discuss the issue with local publican John Duignan after he too hit out at the newspaper for its ‘Terror Town’ article.

“I will consider that,” he philosophically stated.

“A lot of towns have issues and Longford is no different.

“It was important for us to make a stand and to not be ridiculed.”

Read Also:  Boycott on tabloid over Longford being dubbed 'Terror Town' may not be lifted

Accusations gangs are leaving Longford residents prisoners in their own homes