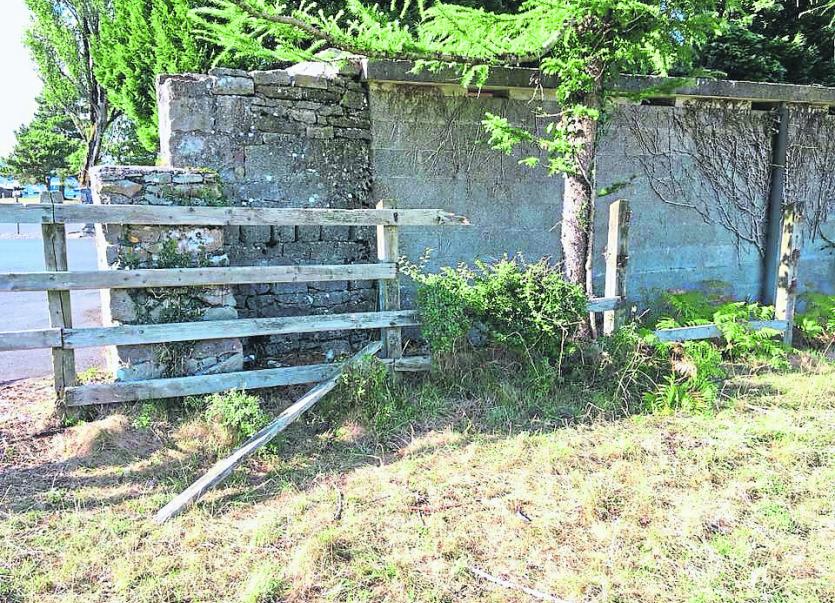 The damage done to the perimeter fence at Newtowncashel's Barley Harbour last weekend.

Residents of Barley Harbour in Newtowncashel have become enraged this week after visitors to the area vandalised a fence and destroyed a historic tree over the weekend.

The Leader has learned that a timber fence with posts that had been erected as a perimeter alongside land with livestock was removed and the wood subsequently used for a campfire.

It has also come to light that a beautiful evergreen tree planted by the late Dick Warner back in 1995 when he visited the south Longford beauty spot was also badly damaged after its wood was hacked away for a fire.

“The latest thing at Barley Harbour is to light fires, so last weekend vandals actually smashed a wooden fence and took lumps out of a tree that Dick Warner planted in 1995, for firewood,” he explained, before pointing out that the fence had been erected by workers on the local CE Scheme and had cost a substantial amount of money to install in the first instance.

“This sort of behaviour is so unacceptable, and yet is so difficult to prevent all this from happening.”

Meanwhile, Cllr Farrell said that there was such delight in the area last week when it emerged that he had secured €15k for enhancement works at Barley Harbour.

The local area representative says that a percentage of that much needed funding will now have to be spent on repairing last weekend’s damage.

“It is so disheartening when this happens,” he continued.

“Some of funding we secured only last week will now have to be used to repair all the damage done and believe me there was lots of work earmarked for that money before this happened.

“People out in Barley Harbour are raging over this latest incident; there are unsociable people going to the area, putting up tents; lighting fires and then causing loads of damage.

“Cutting down trees for God’s sake where do you see the likes of this?”

Cllr Farrell also says that plans are in the pipeline to open up Lough Ree and create a state of the art amenity hub in south Longford with Barley Harbour at the core.

“We need to mind what we have and take good care of it,” he warned.

“It’s the small things that matter.”