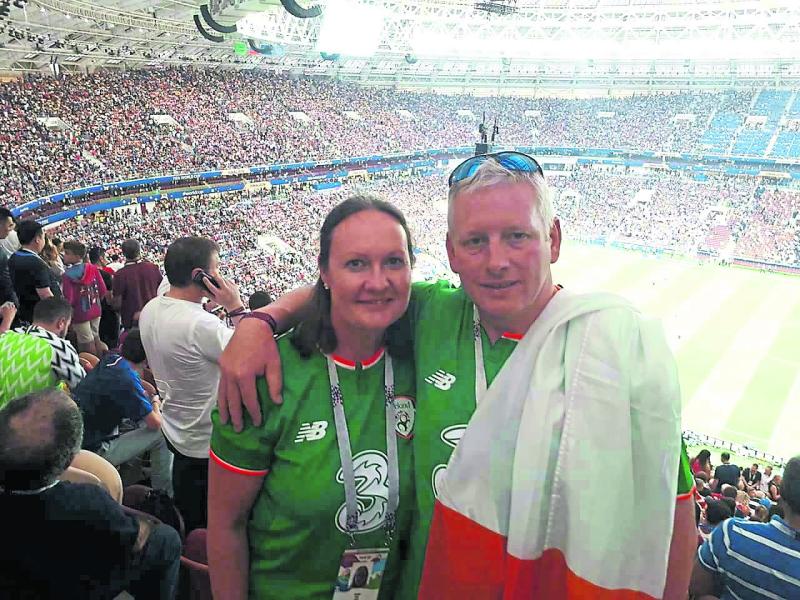 Shouting for France: Laura and Gerard McVeigh in the stadium for the World Cup Final in Moscow on Sunday.

The World Cup may be over but it will take a long time for the excitement to die down in the McVeigh household after husband and wife, Laura and Gerard, enjoyed an unforgettable, all expenses paid trip to Moscow to see France battle it out with Croatia on Sunday.

Gerard McVeigh won the trip with Paddy Power last month and he and his wife were treated to an incredible trip of a life time to see the most prestigious game of football in the world.

“It was super,” Laura told the Longford Leader on Tuesday morning.

“It was so well organised. We were picked up at our house on Thursday morning and brought to the airport. We had passes to the VIP lounges in all the airports, free food and drink, flights. Everything was looked after.”

On arrival in Moscow, the couple were driven in style to the five star Ritz hotel, where they enjoyed a free three course meal with wine.

The following day, Laura and Gerard were taken on a tour of the city with an English-speaking guide.
“It's a beautiful city with beautiful buildings,” said Laura, still full of excitement from the trip.

“Our guide told us all about the history of the city. I couldn't get over how clean it was.

“And she told us all about the different customs, like if you give flowers, they have to be an odd number. It was all really interesting.”

And they certainly had a good night on Friday with a two-hour vodka-tasting experience and food.

“Of course, after that we went and found the Irish pub,” Laura laughed.

On the big day - match day - Laura and Gerard were kitted out in their Ireland colours and shouting for France.

“We had our Irish flag and jerseys so everyone wanted photos with us. There was a great atmosphere. Everyone was so friendly and we kept getting into groups for photographs,” Laura recalled.

Included in their fantastic prize was a private driver from the Ritz to the hospitality village where the McVeighs enjoyed access to the VIP Marquee within the stadium perimeter.

Friendly hostesses, a complimentary bar of beer, wine and soft drinks, and a deli-style food menu meant they were well fed and watered for the day.

To top it off, they were given commemorative gifts.

“So we put the bet on France to win and we did really well out of that.”

The couple are so grateful that they had the opportunity to take this trip of a lifetime and were keen to thank those who made it happen.

“We really want to thank Tony Buckley, our contact in Paddy Power, who was texting us to make sure we were being looked after.

“And we want to thank our three babysitters, Teresa, Eileen and Liz. Without them we couldn't have gone,” she said, referring to her sisters and sister-in-law who looked after the couple's three children, Grace (10), Jack (6) and Fionn (3).

“We didn't know what to expect on this trip, but it was great. There was a carnival atmosphere. I don't know how we'll ever come down from it,” she concluded.