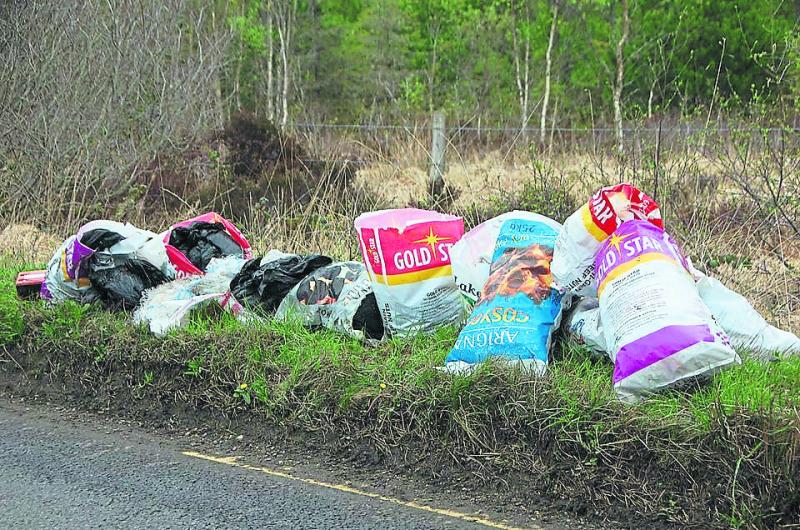 There are calls this week for those fined for illegal dumping to have the monetary penalty taken at source.

Anyone found guilty of illegal dumping in Longford and who fail to pay fines issued to them by the courts will no longer be given a “free dinner” in prison and instead have monetary penalties taken at source.

They were the animated overtures made by Cllr Paraic Brady at last week’s meeting of Longford County Council as he took issue with an apparent rise in fly-tipping across the county.

The Drumlish based local politician led calls for the Council to increase the level of fines issued to those convicted at District Court level from €1,500 to €5,000.

Perhaps more strikingly was his demand to see fines taken from people’s social welfare and other income entitlements should they fail to meet the terms of court imposed judgements.

Cllr Brady said his request was loosely based on the overcrowded prison system and the propensity of certain individuals to opt for a stint behind bars and “a dinner” instead of paying their fines.

“I have a major problem with illegal dumping that goes on in our county,” he frankly put it.

“We are taking people to court but when they are there they usually don’t pay their fine and then they are convicted to two to three months (in prison).

“We then bring them down to Castlerea and give them a dinner and bring them home the same day.

“What we should be doing is taking it out of their social welfare or any income they have.”

Cllr Brady added there was an onus on local authorities like Longford County Council to conduct a review of their litter enforcement policies and the additional burden this was placing on the taxpayer.

His party running mate and Fine Gael group leader Cllr Micheal Carrigy agreed, saying the time had come for the Council to take a “hard stance” with illegal dumpers.

He also said talks had been held at Strategic Policy Committee (SPC) level which called on all households to either provide proof of how they disposed of rubbish or face some form of financial penalty.

Cllr Mae Sexton said while she agreed with the suggestions made by both previous speakers, the Council needed to examine the prospect of employing additional resources after hours in a bid to catch people in the act.

“We need to look at what is happening after the normal 9-5 hours because I am watching people coming into town at night with their domestic rubbish and using the bins on the public streets,” she said.

Director of Services John Brannigan, on foot of a proposition made by Cllr PJ Reilly, said the local authority was looking at a number of areas to provide greater accountability over how domestic household waste was being dispensed of.

One of these measures, he added, was by adding a nominal charge to tenants’ bills spread over 52 weeks of the year.