“This plaque will serve as a testament to the fearless determination of those brave men and women.” 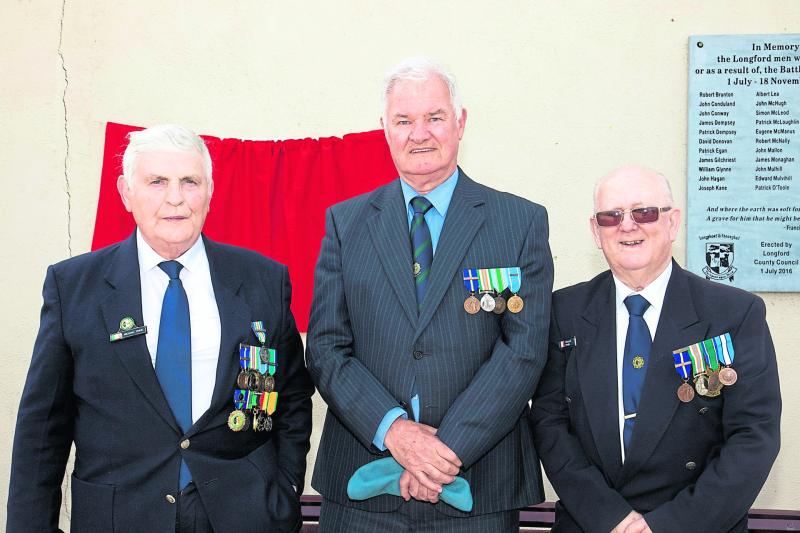 A great tribute was paid last Thursday evening to the men and women of Longford and surrounding areas who served with the United Nations Peacekeeping Missions from 1958 - 2018.

A ceremony was held in the Garden of Remembrance on Water Street, and saw the unveiling of a plaque dedicated to those brave soldiers who have done so much for their country over the past 50 years.

Speaking on behalf of herself and her colleagus in the council, Cathaoirleach of Longford Municipal District Cllr Mae Sexton said it was “a great honour and privilege” to be paying such a worthy tribute to the men and women who served in the Peacekeeping Missions.

“As chair of the Longford Municipal District council, it is my great honour and privilege on behalf of all my council colleagues to officiate here today on this extremely important occasion - the unveiling of this plaque - to publicly and permanently pay tribute to the courage, bravery and sacrifice made by the patriotic, distinguished men and women who have served with such distinction with the UN since 1958,” she said, addressing the large crowd that gathered to pay tribute.

“This plaque will serve as a testament to the fearless determination of those brave men and women on their foreign duties.

“As councillors, we believed that these sacrifices and bravery, which involved such personal risk, required this special honour, recognition and ceremony today, not only to thank all of you and your families, but as a reminder of the importance of our peacekeeping forces, that play such a vital role in ensuring that the areas in transition from war to peace get the assistance and support from countries who have emerged from similar struggles in our pursuit of a peaceful world.

“We - your communities, your families, your county and your country - are extremely proud of you. As ambassadors for our county and country, you have done us all an immeasurable service and we owe you a great debt of gratitude and are delighted here today to have that opportunity to pay this very public tribute,” she said.

The sun gleamed off the many medals and badges that were pinned to the uniforms of the local O.N.E branch, which comprised a number of men who served in the Peackeeping Missions over the past number of decades.

One such man was Hugh Farrell, who is also a local historian and who said it was “a great honour” to be able to stand in front of such a large crowd at such an important event.

“From time immemorial, people have been leaving this land to serve in far flung outposts of different empires, and for many different reasons and causes,” he said.

“I suppose many went with peaceful intentions but, through no fault of their own, ended up on bloody battlefields and in unjustified wars. From 1960, however, most that served overseas went to keep the peace.”

In 1955, Ireland joined the United Nations, he explained, and this gave “a new lease of life to the Irish army”, which had been “fairly stagnant” since the end of the Emergency.

“Ireland’s membership of the United Nations has been central to our foreign policy since we joined. The principles and values enshrined in the UN charter are common goals held by Ireland and our EU partners, including maintaining international peace and security,” Mr Farrell continued.

“The fact that our country had no imperial or colonial baggage ensured our troops were welcomed as peacekeepers in almost every nation that suffered from the rigours of war.

“Ireland’s participation in peacekeeping operations has promoted a positive image of Ireland and its defence forces.

“I would like to thank Longford County Council for their generosity in erecting this fine tribute to all those peacekeepers who served over the past 50 years.

“In the past, Longford County Council has honoured the Jadotville men with certificates.

“I believe they were one of the first local authorities to do this. It is particularly gratifying to the families of all those who have passed on, who know that their loved one’s contribution to the cause of peace has not been forgotten.”

On the subject of Jadotville, the 'Tiger of Jadotville' himself was in attendance on the day and was delighted to be present for this very high honour.

Michael Tighe spoke brifely about his time in Jadotville, describing it as “far and above everything else” a sometimes “scary place”.

He went on to pay tribute to his comrades who are no longer with us, but who “soldiered under extreme duress” in Jadotville.

Addressing the plaque erected in the Garden of Remembrance last Thursday, Mr Tighe commented: “I’m extremely honoured to be here to be involved in the unveiling of this plaque by Longford County Council. And I want to thank them sincerely for their effort.”

The unveiling of the plaque was followed by a moment of silence and the raising of the Irish tricolour.

The plaque can now be seen among the ever-growing collection of dedications in the Garden of Remembrance in Longford town.

Read also: Medal of bravery to be awarded to Longford veteran