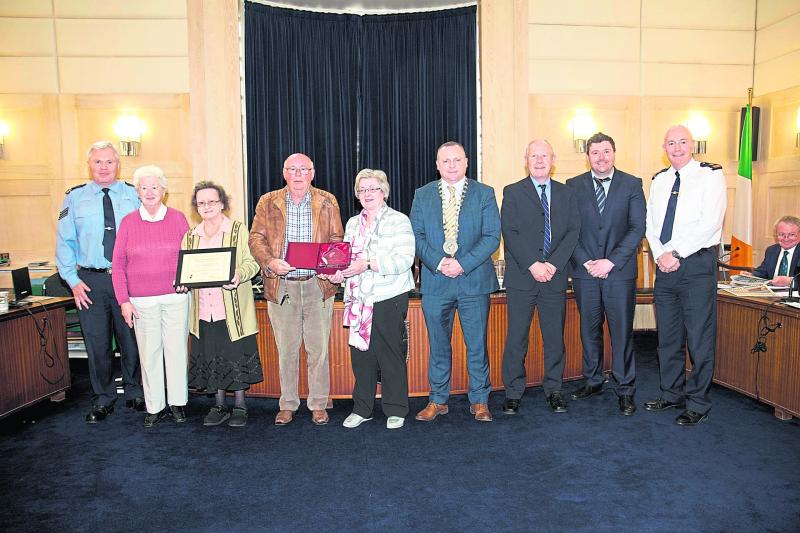 A pioneering anti-crime initiative aimed at mobilising older people in communties across the county and which recently came in for national recognition looks set to be replicated at a national level.

The Crime Ambassadors Programme rolled out by Longford Gardaí 18 months ago has become a steadily emerging success story in the wider spectrum of crime prevention.

And, in a bid to impart its new found repute, local stakeholders were on hand to relay many of those accomplishments at last week’s meeting of Longford County Council.

In his role as head of Longford Gardaí’s Community Policing unit, Sgt Lionel Mullally said the idea behind the ambassadors initiative could be traced back to the Gardaí’s initiation under its then commissioner, Michael Staines.

“He came up with the idea of having an unarmed force which flew in the face of all logic and all common sense.

“He was told it wouldn’t work but his argument was if you have a police force that is community based and knowledge based you could have smart policing and that was before smart policing ever became.

“It’s changed with our renewal and modernisation programme and code of ethics but at the end of the day everything we do comes back to that.”

Sgt Mullally said the initiative had already made significant inroads in ensuring a great garda visibility at a local level while also tackling the perception of crime.

This, he said, was done by appointing ambassadors in various communities whose task it was to effectively “spread the Gospel” of crime prevention, thereby allowing older and more vulnerable people to feel more at ease within their respective communities.

Read Also:  Lanesboro crime meeting hears of how technology can play part in warding off criminals

“The big thing for us was the feedback we got when they (ambassadors) came back to us at designated times, told us what was going on in the areas, what the concerns were and we dealt with it.

There were appreciative sentiments too from Supt Jim Delaney, who told of how the crime ambassador’s success and consequent expansion into his home town of Ballymahon has been a source of immense personal pride.

“Longford County Council, Older Persons Council and the elder and vulnerable persons in our community, to us they are very important external stakeholders and are central to our partnership ethos,” he said.

“The award is justification to the dedication of those involved in its genesis, the rollout that followed and its operation.”

Read Also:  What can CCTV do to solve rural crime in Longford?

Kitty Hughes, chairperson of Longford Older Persons Council said one of the trademarks of the programme’s success from an older person’s perspective could be traced to the saying: ‘No decision about me, without me’.

She said: “This is an opportunity for us to have our voices heard and for us to participate in the decision making process like never before.”