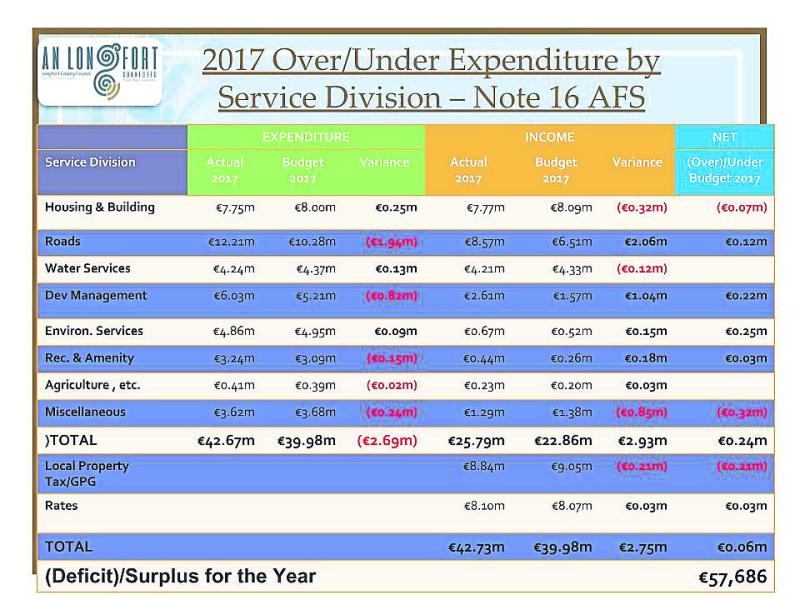 Longford County Council is in the healthiest financial status it has been in for some time.

Head of Finance John McKeon told councillors at last week’s local authority meeting that it is close to €250,000 in the black courtesy of a €232,000 surplus at the end of the 2017 financial year.

An increase of over €1m in housing grants, reflecting a wider upturn and demand in the sector last year enabled the Council to increase its expenditure levels by nearly €2m.

A progressively improving local economy also correspondingly saw the intake of commercial rates monies increase to 89 per cent, and only second to Westmeath when compared to 30 other local authorities nationwide.

They were figures which garnered a supportive response from every quarter of the Council’s chamber last Wednesday evening.

Cllr Seamus Butler said the results contained in the Council’s Draft Annual Financial Statement underlined the new found confidence that was now permeating through many towns and villages across the county.

“The increase over the years in rates has reflected the business and commercial life of Co Longford,” he noted.

“To be taking in 89 per cent in commercial rates is laudable but it really is a reflection of the improvement in the business environment in Longford.”

Cllr Butler paid specific attention to a business incentive scheme introduced in March 2015 as a case in point.

Cllr Gerry Warnock was another to talk up the positive aspects of a report which he said was just the latest in a long line of similar documents which had been presented to local councillors.

“It’s indicative of how proactive and prudent we (Council) have been as a local authority in managing our finances over the last number of years and it’s also indicative of the level of buoyancy in the local economy over the last couple of years,” he contended.

Fianna Fáil’s Joe Flaherty said he was looking forward to the adoption of a new retail strategy for the county, adding it was time hard pressed retailers were given the necessary breathing space in which to keep their doors open.

He said evidence of the continued difficulty facing retail was illustrated only last week when agents successfully shook hands on bringing a new retailer to Longford town some two years after discussions first began.

Fine Gael Cllr Micheál Carrigy said he would be pushing to ensure his proposal for a rates rebate scheme, first flagged last September, would be set in motion by the start of next year.

“I put forward a proposal last September after going to every single business and doing a survey without having the luxury of being able to print it in the local paper to see what the issues were.

“One of those, naturally enough, was rates and we, as a Council, accepted in September that we would look at a rates rebate scheme which is done in a number of other local authorities,” he said.

Head of Finance John McKeon refrained from insisting the precise terms of Cllr Carrigy’s proposal would be initiated, adding that while a new scheme to replace a business incentive initiative was likely, it’s workings needed to be “considered” by respective committee members.