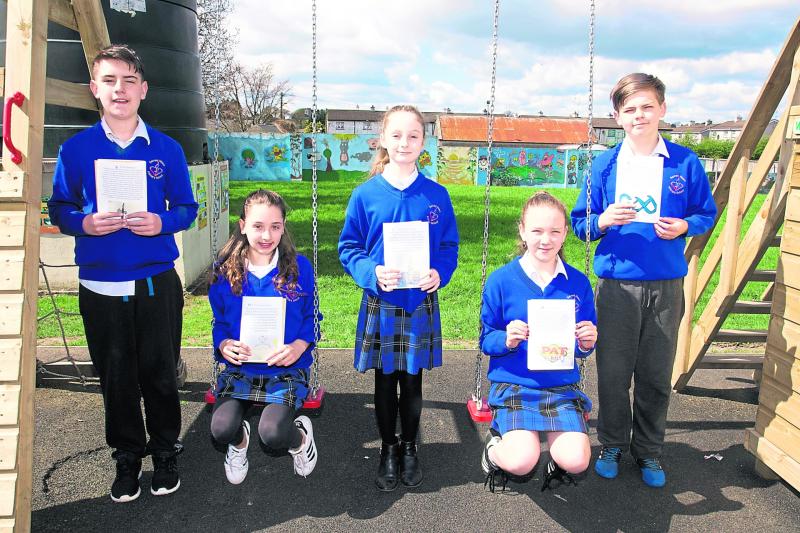 Callum Leddy, Mia Smith, Serena Stokes, Eileen Boyle and Donagh Callaghan from 6th class who helped in the making of Granapedia, the A to Z history booklet of Granard. Photo: Michelle Ghee.

It’s not every day you meet a group of sixth class pupils who run their own business, but that is exactly what happened to the Leader when it called out to Sacred Heart Primary School in Granard last Friday.

The pupils have created the first ever encyclopedia of Granard, aptly entitled ‘Granapedia’ as part of the Junior Entrepreneur Programme which is funded by Tweak and operated by Nurture Entrepreneurs Ltd.

Between the covers of this wonderful little booklet is a multitude of historical and present day facts and information coupled with some fantastic illustrations.

Granapedia covers everything from the Battle of Clonfin and show jumper Eddie Macken to the Motte, Queen Maeve and the Harp Festival, to mention but a few!

The local pupils are currently selling it for €5 and as one of them remarked in conversation with the Leader, “there has been a steady uptake so far!”

Eileen Boyle who wrote some of the content in Granapedia said that when the pupils met the ‘Dragons’ who were part of the programme, some of the ideas and plans they had really started coming to fruition at that point.

“We got sent to businesses around the town and we all sold around five booklets to each business, but we had to print more because we ran out!”

It’s true you know; the pupils had 150 booklets initially to sell and very soon the printing press had to be wheeled into action again as it became evident they needed more.

Another 100 copies have now been made available and plans are afoot to set up a stall outside St Mary’s Church in Granard after Mass this weekend to sell them.

Meanwhile, Granapedia’s illustrations are beautifully conceived and one of the artists Mia Smith whose creations include the Motte and the Olympic Rings told the Leader that her inspiration came from climbing the historical Motte herself and getting to experience the freedom and exhilaration that came with the climb .

Meanwhile, Conrad Mickiewicz who also provided his artistic touch to the publication focused on the Clonfin Ambush.

“I drew the picture,” continued Conrad, before pointing out that Eileen Boyle then wrote the story around the illustration.

“So much has happened in Granard for such a small place and I find that really interesting.”

And, for any business to succeed there must be some control over the finances.

As the group has already sold 150 copies so far, there’s no doubt but there is a serious amount of money to take care of!

Donagh Callaghan has been appointed financial director and he proudly said that his job was to write all the income down and hand that along with the money, back to the teacher.

“We keep a very good track of things,” he smiled.

“My father has his own business so I am very interested in this; there has been a lot of sales and it has all been good.”
Callum Leddy, meanwhile told the Leader that he too was part of the booklet’s illustrations.

He said he was inspired by Granard’s history when it came to drawing and it has been an experience he thoroughly enjoyed.

The pupils also took the opportunity to thank well known Granard historian Jimmy Donoghue for all his assistance and help with the project.