Honouring the brave Longford Lions of the Siege of Jadotville 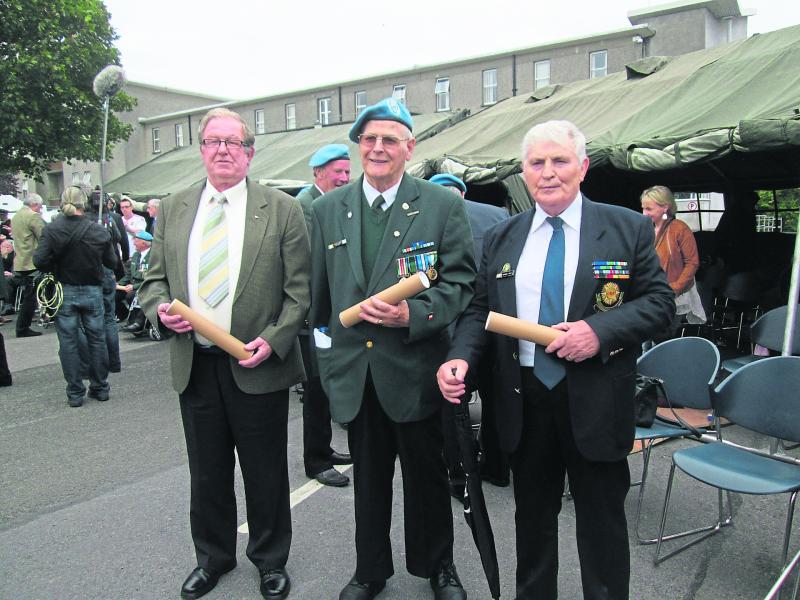 When we think of heroes we tend to think of great mythical warriors with fiery swords or caped crusaders clad in splendid colours, performing impossible deeds on a regular basis.

The reality is quite different of course and heroes and heroines come in all shapes and sizes and brush shoulders with us daily.

The three men pictured, from left, Sean Dowler, from Legan, Charlie Cooley from Edgeworthstown and Michael Tighe from Elphin are living proof of heroes who overcame great hardships and adversary during their long military careers.

Their greatest trial was at the Siege of Jadotville which they passed with flying colours. It would be no exaggeration to say those three along with the other survivors of that heroic stand are probably our greatest living heroes.

They served with the 35th Infantry Battalion in the Belgium Congo in 1961 and were part of the now famous A Company.

Their Company was ordered to Jadotville to provide protection to the Belgian citizens who felt under threat from the native Congolese. However it was the Belgians with white mercenaries and native troops who turned on the Irish. Commandant Pat Quinlan the OC of A Coy sensed the hostility from the start and had his men dig a network of trenches which proved to be the salvation of his troops.

Their supply of water was cut off on September 9 as was the electric supply. The first attack took place on September 13 when most of the troops were at mass. It was beaten off by a few gallant soldiers, giving the rest of the troops time to take cover and prepare for the next attack.

For five days the 156 Men of the Western Command repelled attack after attack against a force estimated to be 3,000 to 5,000 strong and with far superior firepower and the use of a Fouga Magister Jet which bombarded the Irish from the air during daylight hours.

Over three hundred of the enemy were killed and between five hundred and one thousand wounded. The Irish men had seven wounded.
The mercenaries called a truce on the 18th and terms were agreed to allow the Irish to keep their arms and march out.

The local Congolese troops agreed to this but the Belgian and French mercenaries wanted hostages and all the time the talks were going on they were moving closer to A Company positions.

Without water, ammunition and medical supplies Pat Quinlan’s options were running out. He looked around at his loyal, dusty, battle hardened warriors, many of them still in their teens, knowing they would follow him to hell and back.

The respect he had for those troops and their magnificent stand against overwhelming odds made his decision for him. He accepted the terms and A Company were prisoners for a month.

In any other country those men would be welcomed home as heroes, but Ireland treated them like pariahs. Why was this? Was it because they had the audacity to live when it was easier to die?

Eventually, after forty four years a plaque was erected in Custume Barracks in Athlone to honour those men, many of whom had since passed away.

On December 2, 2017 those three men along with their surviving comrades were finally fully recognised for their outstanding bravery under fire.

The fact that those three men pictured here returned to the Congo with the 37th Battalion less than five months after their release from captivity speaks volumes for their commitment to the cause of peace.

Calls for Jadotville soldiers to be recognised on an individual basis

'The Siege of Jadotville' premieres in Longford