Neven Maguire serves up plenty of Christmas delights in Longford 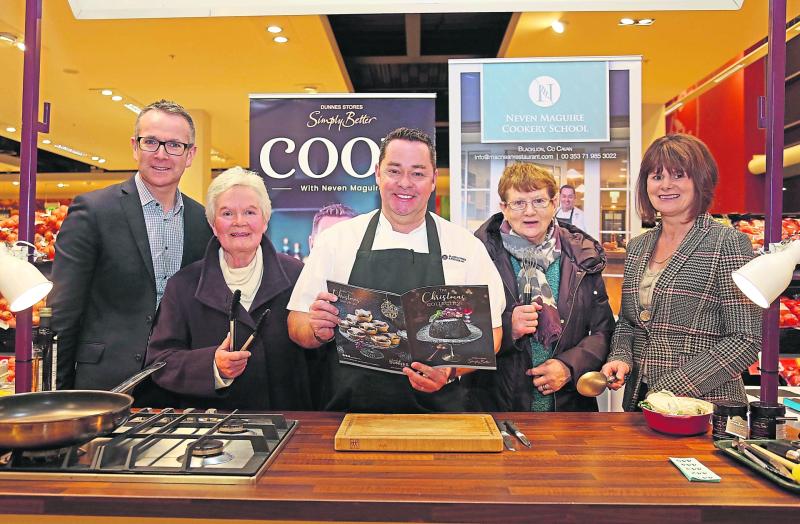 Speaking to the Leader afterwards, Neven said he was delighted with the turnout and pointed to the special place that Ballymahon held in his heart.
“I’ve been working as Dunne Stores ‘Simply Better’ Ambassador for the last two years and I was here in Longford 10 years ago when the store first opened; Gay Byrne was here and it’s lovely to come back,” he said.

Neven’s Auntie Maureen who resides in Ballymahon is a retired home economics teacher and it was she, says the celebrity chef, who passed onto him “so much love and appreciation” for good food.

“All of the Christmas recipes that we make in the restaurant - the mince meat, the Christmas pudding - they are all hers, she is a wonderful woman,” he continued, before pointing to the fact that he and his family visited Ballymahon regularly during his childhood.

“Ballymahon has a special connection to my family and to me - I suppose it’s where good food starts, from you parents and family.
“With Auntie Maureen, she is just a great cook.”

The Co Cavan chef makes no bones about his passion for wholesome and nutritious food.
He says his mission now is to try and ensure that everyone in Ireland knows the basics of cooking because the country “has the best produce in the world”.

“Start of with good, wholesome, seasonal food; it’s the food producers that are the stars of the show - the people who make it,” he continued
“The chicken, the beef, the fish - we have some of the best ingredients in the world and don’t forget that when you cook from scratch you can control the amount of sugar and salt that goes into your food.

“To cook good wholesome food for your family is money well spent.”
Meanwhile, Neven said that if people took the time to cook and used wholesome ingredients to boot, as a nation “we would be much healthier”.
“I cook on a Monday and Tuesday and my twins (6) know good food now; if we go out for dinner they will eat the same food as myself and my wife like fish or beef cheek.

“I certainly didn’t eat like that when I was six, but food has changed a lot; even though we have always had good ingredients my mother taught me how to enjoy good wholesome food, how to roast meat properly, but there is a generation out there now who don’t know how to do a roast.

“I think that if the Government is serious about tackling obesity and encouraging people to eat well then we need to go back to the drawing board.

“Home Economics in school is such a great subject; every young child should be able to cook.

“If we are serious about it get the schools involved.
“Don’t call it Home Economics, call it life skills; teach children how to cook and I’m talking about cooking on a budget.

“Teach them to cook mince, to cook soup and chicken.
“We all have to eat everyday and I really do believe that if we taught children how to cook on a budget, we would all be a lot healthier.”