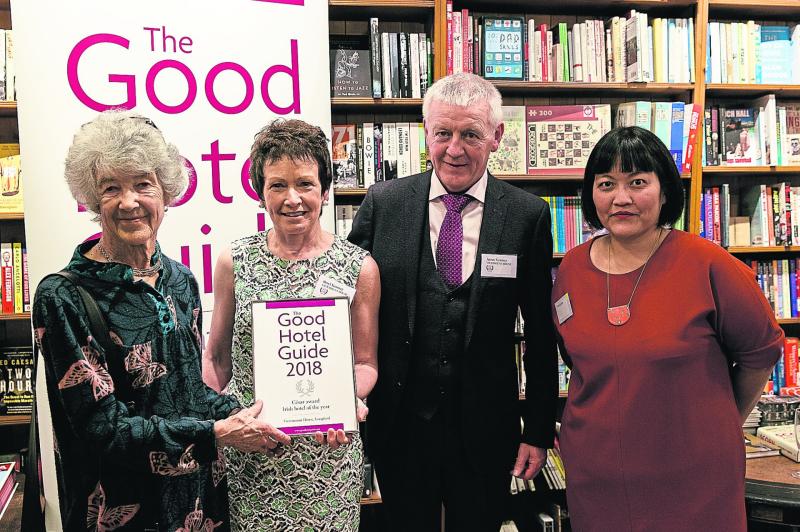 October has been a fantastic month for Viewmount House, which received two awards in the space of a week or so.

Viewmount House is well known for its top class hospitality and delicious food and, in last week's Longford Leader, it was reported that the beautiful country lodge was awarded the Georgina Campbell 'Hospitality Hero Award'.

But, since then, it has emerged that the popular destination has also been named 'Irish Hotel of the Year' at the 2018 Good Hotel Guide César Awards which took place in London on October 9 last.

Speaking to the Longford Leader ahead of the trip to London, Beryl Kearney said that she and her partner, James, along with Head Chef Gary O'Hanlon, were absolutely thrilled with both awards.

“Winning these awards gives Viewmount House and Longford national exposure and it is a marvellous boost for all our staff,” she said.

“Our award is based on the fact that we have put Longford on the map as a destination.”

The Good Hotel Guide is the leading independent guide to hotels in Great Britain and Ireland.

The 10 César awards, named after César Ritz, are presented to businesses that have demonstrated excellence in their field out of the 424 main entries in the guide.

Each hotel is selected purely on merit, based on visits by inspectors and readers.

Viewmount House, a secret tucked away in the heart of Ireland, was awarded Irish Hotel of the Year.

The Good Hotel Guide commended Viewmount on its “cleverly designed, well-maintained gardens” on the outskirts of town.

Beryl and James Kearney’s Georgian mansion has “uninterrupted views” of the surrounding land, and a “cheerful ambience” within.

Speaking on the César Awards co-editors of the Good Hotel Guide, Adam Raphael and M. Astella Saw said: “Our 2018 César winners must be celebrated for their individuality, warm hospitality and meticulous service, which set them apart from their competitors.”