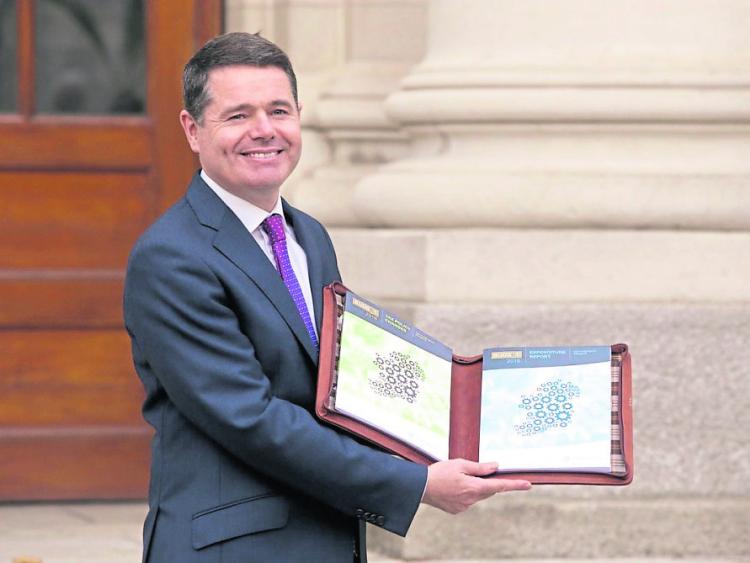 There has been a mixed reaction locally to last week’s Budget announcement by Finance Minister Paschal Donohoe.

The Government ushered in its second of three anticipated budgets in accordance with its Confidence and Supply Agreement with Fianna Fáil.

As expected there were changes to income tax thresholds and the universal social change (USC) benefiting the majority of workers as well as those with private pensions.

An additional 1,300 teaching posts, 1,000 extra special needs assistants and provision for a further 800 gardaí have also been promised.

The Government announced its intentions towards raising the point people enter the higher income tax rate by €750, meaning the majority of workers will have an extra €5 a week extra in their pockets.

They were among some of the highlights which drew a favourable response from Longford/Westmeath Fine Gael TD Peter Burke.

He described the €5 increase to social welfare payments and €100 boost to the tax credits of home care workers as “fair and prudent.”

Mr Burke said the combination of tax cuts and spending increases were designed to be fair and measured while also giving back to as many people in society as possible.

“An extra five euro to all social welfare payments from the end of March may not seem like a lot, but it is preferable in my opinion than going back to giveaway budgets of the late 90s and naughties only to have to impose savage cuts in the subsequent years,” he said.

“We can build on these increases gradually and avoid the boom and bust cycles of the past.”
Fellow constituency TD, Fianna Fáil’s Robert Troy welcomed what he described as a “modest yet progressive budget” which he believes has seen a greater emphasis on service delivery than has been evident in recent years.

“We (Fianna Fáil) have ensured that this is the second progressive Budget in a row,” he said.

“Our focus has been on ensuring that tax reductions are focused on low and middle income earners and maintaining a 2:1 budget ratio that emphasises services.

“We also demanded that pensions and all social welfare payments be increased by €5 for the second year in a row”.

At local level, the reaction was arguably more guarded.

Cllr Paul Ross led much of that feeling, opting to raise concerns at the Government’s four per cent increase to stamp duty.

“This rise will affect 3 out of 4 agricutural land transactions and will have a serious impact on farmers trying to expand their holding,” he said.

“This will also affect farmers who have recently bought or who are planning to purchase lands. This rise in stamp duty will affect those farmers who can least afford it as they cannot qualify for young farmer schemes.”

“The hard pressed mortgage holders who were victims of the over inflated housing maret and the subsequent crash continue to be left to “paddle their own canoes” without any real efforts to resolve the mortgage crisis,” he said.

“To be honest, there wasn’t much in it for anyone,” he said.

“They (government) put cigarettes up by 50c overnight but pensioners won’t see an increase in their pensions until next March.

“Sure, by the time that comes in you will be almost expecting another Budget.”