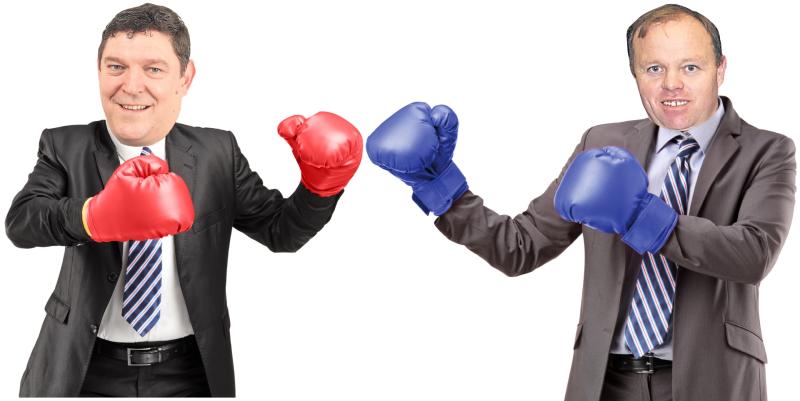 The world may well be awaiting the imminent announcement of a Floyd Mayweather-Conor McGregor showdown but in Longford two political heavyweights have been doing their level best to emulate those theatrics with their own verbal set to over the past seven days.

The gloves effectively came off Cllrs Paraic Brady and Mark Casey last Monday when both men went toe to toe on Shannonside Radio.

Both men locked horns over recent funding announcements which had come the way of south Co Longford courtesy of the seemingly increasing presence of Independent TD Kevin ‘Boxer’ Moran in the region.

The station’s answer to HBO ring announcer Michael Buffer, anchor Marie Claire Greally didn’t need to belch the words: ‘Let’s get ready to rumble’ as the pair went at it from the off.

Casey was first in, delivering a telling blow to Brady’s solar plexus as he took issue with the Drumlish man’s criticism of Mr Moran.

“For councillors to be giving out about Boxer Moran delivering for Longford is absolutely ridiculous,” he snarled.

“Since he got elected over the past 12 months, we have had more infrastructural money given to Longford than we had in the previous ten years.”

The sighs of indignation sounding clearly audible across the airwaves, Brady went back to his corner bloodied, but not entirely dejected.

Cheeks puffed and chest out, the north Longford farmer adopted the centre of the ring as the bell for round two sounded.

He started by landing a stiff jab to his Lanesboro rival by defending the name of Fine Gael TD Peter Burke and the part played by the government in bringing Center Parcs to Longford.

“It’s a good job Center Parcs was around before Kevin Boxer Moran because Mark seems to think that everything he announces her delivers on,” he waspily snapped.

Leading from the front, Brady pushed Casey back and onto the ropes with a clubbing left hand as he poked fun at the deluge of announcements which had been made by Mr Moran.

“The reason he is getting all these headlines is because he is basically holding the balance of power between a Fine Gael-led government and to keep things sweet that is why he is getting all of these announcements.”

The verbal sparring certainly drew plenty of hysteria locally, not least from Mr Burke himself who took it upon himself to contact the station himself and add his tuppenceworth to it all.

Less than 48 hours later however, rounds one and two quickly enveloped into three and four at February’s monthly meeting of Longford County Council.

This time it was Brady who reopened the war of words by reading out a notice of motion which had been tabled by Granard Municipal District.

Looking none the worse from Monday’s opening salvo, the Drumlish councillor attempted to draw Transport Minister Shane Ross into the mix by calling for the reintroduction of dedicated Local Improvement Scheme (LIS) funding.

Adopting an orthodox stance, Brady cheekily dropped his hands, teasing Casey with the plea: “"Everyone knows north Longford has the largest road structure and we have 80 or so LIS alone.

"We have to do something and I am calling on Shane Ross to consider bringing back LIS grants."

“I think we have to grasp this nettle a lot stronger than we have been doing," said Cllr McEntire.

Another seasoned campaigner, well used to delivering rhetorical jousts of his own, Cllr Colm Murray, also threw in his own counter.

The Kenagh colossus attempted to pile the pressure on an increasingly bruised looking Casey via a stiff upper-cut over Mr Ross’ recent travails.

He questioned the merit of Mr Ross' decision to wade in on debates surrounding the control over judicial appointments and President Donald Trump, claiming the Independent politician would be better served "looking after his own department".

But Casey is anything but a novice political performer when it comes to oral brawls like the one witnessed last Wednesday.

Gumshield firmly pressed down on, the non-party punisher came out for the fourth round all guns blazing.

He said LIS had been in operation during the Fianna Fail led administration of 2008-11 with no sign of its reintroduction over the past six years under Fine Gael.

Casey, sporting an artistic tattoo on his right bicep with the slogan: ‘Bring it on’,  insisted Mr Ross had inherited a "basket case" from both those administrations.

Staring his north Longford foe squarely in the eyes, he questioned why Brady amongst others were at pains to lambast the Independent Alliance given the recent funding announcements made by Mr Moran.

As round four came to a nail-biting close Casey impishly invited councillors to sidestep their own Dail deputies and instead contact Mr Moran himself concerning issues of a local nature.

"I can't understand it, I really can't. Every rep I went to the Boxer with I have got a good result from. Listen, it's (086) that's the number you need to call if you want something done in Longford.

"He can't look into his crystal ball unless you contact him."

Clearly buoyed by what had gone before, Casey looked to press home whatever psychological advantage he may have built up by taking the contest to his Fine Gael foe in round five.

Like Casey however, Brady is not known for sheepishly running into the corner and waving the proverbial white flag.

Gazing ominously over at his opponent, Brady stormed back with a stinging barrage of blows to Casey’s upper body.

Fists clenched and elbows locked in, the Drumlish Dynamo hit back, challenging Casey as to the economic fruits which came from a council led delegation to Mexico in 2015.

"That's fine," he shouted across at Casey.

"You might mention to Boxer about that trip to Mexico and these jobs you were supposed to deliver because you certainly didn't deliver them."

And with that, a fatigued looking referee Mick Cahill brought proceedings to a halt as both fighters went back to their respective corners.

Five energy sapping rounds down and with neither Casey and Brady showing any signs of weariness at this stage, it’s reasonably safe to suggest that this bitter dual could well go the distance.