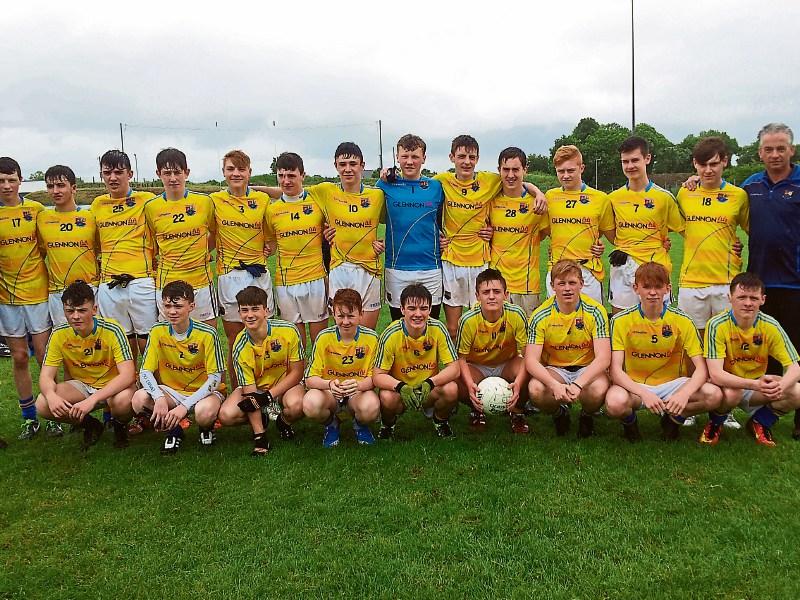 Longford were second best against Sligo in their opening fixture in this year’s Fr. Manning Cup U-16 Football Tournament played in tough conditions at the Sligo Centre of Excellence in Scarden on Saturday last.

Longford were guilty of a slow start, although not helped by a strong wind against them in the first half, and a 9 point half-time deficit (2-6 to 0-3) was too difficult to overcome.

A well drilled, physical Sligo side made it very  difficult for Longford to break them down and the double marking of chief forwards Aidan McGuire and Dylan Farrell made it extremely hard for Longford to get scores.

Consistently throughout the Gerry Reilly Cup during the summer, Longford conceded early goals in both halves in creating a real uphill battle and that problem was repeated in Saturday's game.  Hubert Gillvary's goal midway through the first half provided the platform for Sligo to build on while Andrew Kilcullen goal early on the changeover finished Longford's chances of a comeback.

Points from influential centre-half-forward Red Og Murphy and Patrick Benson got Sligo off to a bright start but they were matched by Luke McEntire and Aidan McGuire scores for Longford. But for the rest of the first half with the advantage of the wind Sligo began to get a grip on the game.

Points from corner forwards Seamus Hailstones and Gillvary and a Red Og Murphy free widened the gap before the crucial blow in the 17th minute. Longford's defence was dismantled through smart Sligo play which led to Hailstones neat effort for a goal to leave his side leading by 1-5 to 0-2.

Longford fought back but another Sligo goal just before the break was a killer blow to their hopes.

Kevin O' Kennedy's shot came off the crossbar for Gillvary to slot home and give the home county  a commanding half-time lead of 2-6 to 0-3.

With the wind in their favour on the resumption, Longford still had hopes of a revival but that was dashed when Sligo substitute Andrew Kilcullen put the ball in the back of the net in the 37th minute.  Longford matched Sligo score for score in the second half but the damage was done in the first half.

Longford now face a serious challenge to reach the latter stages of the competition. This Thursday evening they face Offaly (who beat Sligo by 2 points) in the final group game at McGann Park, Kenagh. To progress further they must beat Offaly by a comprehensive 15 points margin to reach the knock-out stages of the Fr Manning Cup competition or if not so then an 8 points victory is required to go into the shield competition.