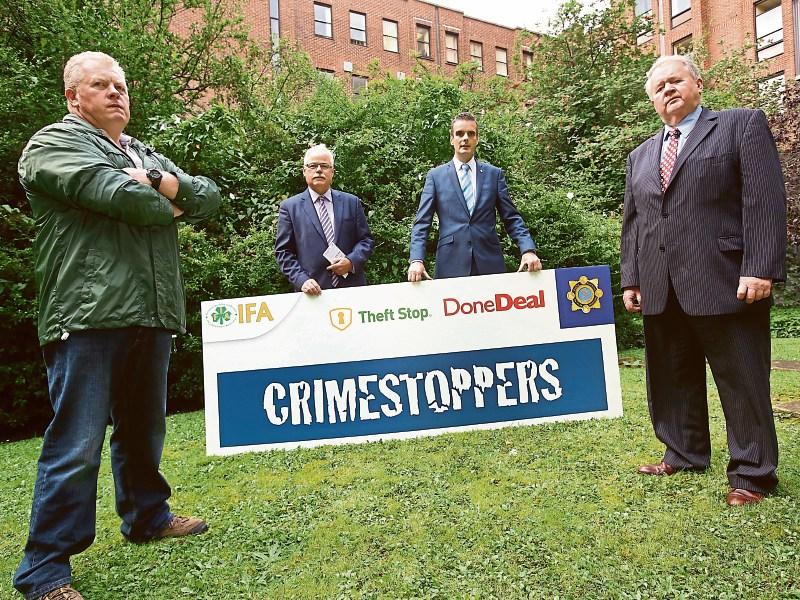 There was much interest in this part of the country in a new campaign which was launched on Monday to combat the problem of farm-related crime and thefts.

Jointly organised by Crimestoppers, the Irish Farmers Association, an Garda Síochána and DoneDeal the campaign is aiming to raise awareness among the public and in particular those in the farming community, of the issue of thefts from farms.

Every year thousands of tools, vehicles and items of farm machinery and equipment are stolen from farms throughout Ireland. Since 2010, over 28,642 farm-related crime incidents have been reported to Gardaí, including burglaries and vehicle, machinery and equipment theft, according to the latest CSO figures. The most common incidents are thefts from farmyards, with over 2,000 incidents being reported every year since 2010.

The next most common occurrence is theft from outhouses or sheds, followed by burglary.

Farmers are being reminded to sign up to the TheftStop scheme (www.theftstop.ie). The joint initiative by the IFA and An Garda Síochána provides members with a unique Security ID. Members can then mark their machinery and equipment with this ID and upload an image of the item to the TheftStop site.

Marked and branded items are significantly less attractive to criminals to steal as they’ll be more easily recognisable by the public and harder to sell on.

Information on any suspicious activity can be given anonymously to the Crimestoppers confidential telephone service by calling 1800 25 00 25. Alternatively, information can be provided to your local Garda station.

Tim Dalton, Chairman, Crimestoppers said, “We provide a fully-confidential means for every citizen to report crime, without fear of recrimination. Calls are free and the information is given completely anonymously. The service consistently elicits very valuable information to assist investigations in both rural and urban Ireland.

“As well as enabling members of the public to report crime safely and anonymously, an ongoing task of Crimestoppers is to encourage the spread of information to make the public more aware of steps we can all take to reduce the risk of becoming crime victims in the first place.

“We hope this joint campaign will help rural dwellers to avoid becoming victims of farm-related crime and thefts.”

IFA President Joe Healy said: “Theft Stop is one of a number of initiatives that IFA is working on for farm families and people living in rural communities

“In the last 10 months, it has been rolled out across 12 counties – Laois, Offaly, Kilkenny, Galway, Cavan, Monaghan, Cork, Cavan, Limerick, Meath, Sligo and Leitrim.”