Brave Longford gunned down by Rebels second half scoring ammunition 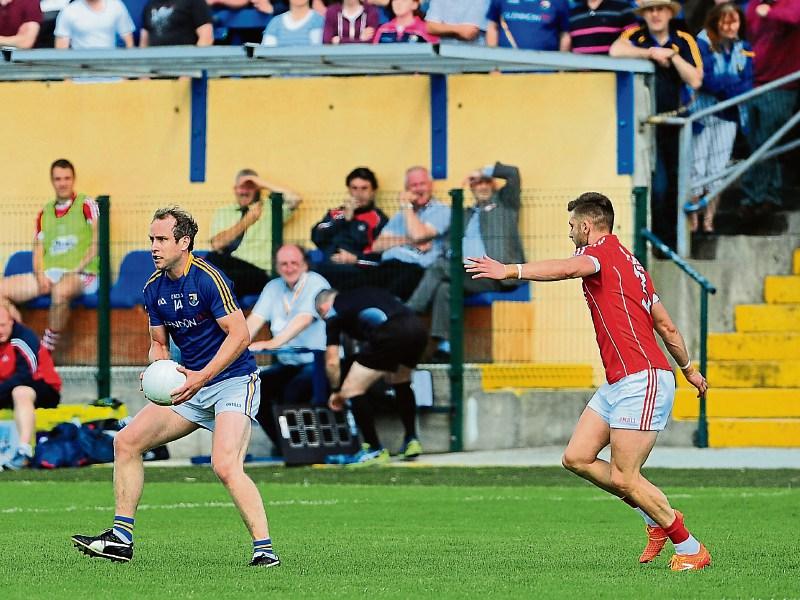 Longford’s 2016 All-Ireland qualifier adventure came to a shuddering halt as they were gunned down by a powerful second half Cork performance before a crowd of 3,567 at sun splashed Glennon Brothers Pearse Park today.
Denis Connerton’s Longford led by 1-4 to 0-3 at half-time as they poured every ounce of energy they possibly could into their display. Their exertions in getting past Monaghan seven days earlier certainly appeared to take their toll on the resumption as Cork began to exert a firm stranglehold.
Cork sprung Colm O’Neill and Paddy Kelly for the second half and these two proved highly influential in turning the screw. The Rebels, indeed, outscored their hosts by 2-6 to 0-2 as their superior power and strength told. Cork finished with 14 men as James Loughrey saw red, while Longford ended with 13 men as Darren Gallagher and Diarmuid Masterson were both dismissed.
Longford, playing in their 32nd All-Ireland qualifier clash since their introduction in 2001, showed no changes to the side as named in the official programme. Whereas visitors Cork made two late changes, introducing the experienced Daniel Goulding and Michael Hurley into their attack at the expense of Colm O’Neill and Luke Connolly.
The 2010 All-Ireland champions, appearing in their 15th All-Ireland qualifier, also left hurlers Aidan Walsh and Alan Cadogan out of their match day twenty-six and considering the media hype this generated during the week by their 11th hour call-up it seemed a bizarre decision by the Cork management.
Having already claimed the scalps of two Division 1 sides - Down (2-24 to 3-17 away in Newry after extra-time) and Monaghan (2-13 to 1-13 away in Clones) - Longford were in absolutely no way over awed by their more illustrious Munster opponents.
Cork’s towering full forward Peter Kelleher was denied a goal after 90 seconds as alert Longford ‘keeper Paddy Collum swiftly closed the angle and saved well with his feet. Robbie Smyth, following a clever Donal McElligott pass, then fired Longford ahead with a fifth minute point much to the delight of the ‘home’ supporters.
Peadar Healy’s Cork, with some strong running and slick passing hit a purple patch, and surged 0-3 to 0-1 ahead by the 10th minute courtesy of fine points from James Loughrey, team captain Paul Kerrigan and Michael Hurley.
Longford refused to panic and by the 19th minute they were on level terms after Robbie Smyth converted a free and Diarmuid Masterson curled over a lovely point after being set up by James McGivney.
Longford’s wily ‘sweeper’ Dermot Brady dispossessed dangerman Kelleher with a well-timed tackle and overall Longford’s defending was very disciplined. If anything, Longford, who were vastly superior around the central diamond, should have been ahead as by this stage they had amassed five wides to Cork’s four and were displaying the greater hunger and urgency.
Glennon Brothers Pearse Park erupted with unbridled elation in the 25th minute when Brian Kavanagh held his composure and clinically drilled a penalty to the left corner of Ryan Price’s net, giving Longford a 1-3 to 0-3 advantage. Darren Gallagher, who recovered from an earlier injury, put Robbie Smyth in the clear and he was hauled down for the penalty.
Daniel Goulding was off target with a Cork ‘45 and the Rebels were fortunate not to see two of their players - Mark Collins and Paul Kerrigan - receive black cards as they began to crumble beneath the pressure Longford were exerting.
Diarmuid Masterson extended Longford’s lead with a super 33rd minute point, 1-4 to 0-3, and in first half additional time, Cian Farrelly’s perfectly weighted pass reached Robbie Smyth and for a brief moment a goal chance looked on, only for the Cork defenders to converge and swallow him up. Half-time: Longford 1-4 Cork 0-3.
On the resumption, Brian Kavanagh and Liam Connerton were unlucky not to add to Longford’s tally before Cork ended their 39 minute scoring famine as Mark Collins drilled over a point, 1-4 to 0-4. Colm O’Neill’s 42nd minute converted free got Cork to within two points and the sub was then denied a goal as Collum saved brilliantly again. O’Neill missed a free but team mate quickly made amends as Mark Collins fisted a point.
Rejuvenated Cork were now completely on top and when Kerrigan slipped a pass inside to O’Neill, he soloed in menacingly and crashed a powerful low strike to the net, 1-4 to 1-6. Impressive sub Paddy Kelly extended Cork’s lead with a well taken point and in the 53rd minute both sides were reduced to 14 players as referee Barry Cassidy flashed straight red cards at Cork centre back James Loughrey and Longford midfielder Darren Gallagher.
Longford, who hadn’t scored since the 33rd minute, broke their second half duck with a mighty 55th minute long range score from Brian Kavanagh, 1-5 to 1-7. However, five minutes later the Rebels delivered a real sucker blow. Collins and that man Kelly combined again and Kelly’s teasing cross was finished to the net by midfielder Ian McGuire, 1-5 to 2-7.
The respective team captains, Michael Quinn and Paul Kerrigan (free), landed points at either end before Longford were reduced to 13 men in the 68th minute after Diarmuid Masterson was shown a second yellow followed by red for a late challenge on Cork’s Eoin Cadogan. And Cork, who outscored Longford by 2-6 to 0-2 in the concluding half, wrapped up victory with a point from sub John O’Rourke in the 4th minute of additional time.