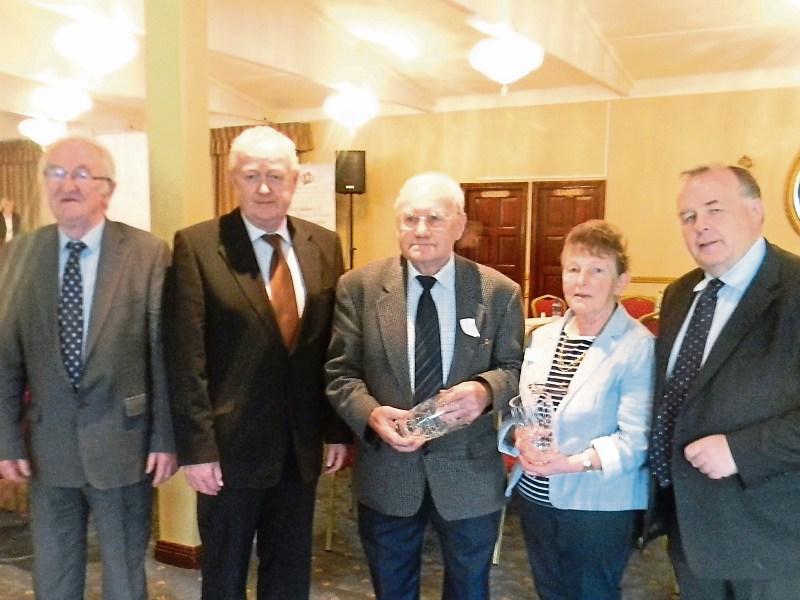 Just weeks after winning a Special Recognition Award, presented by the Longford Association in Dublin, local historian Paddy Egan was honoured once again, this time by Irish Rural Link.

“They represent every county in Ireland, there are people there from Kerry, Wexford, Meath, Mayo, Dublin...” Paddy listed. “They’re an umbrella body for rural development.”

A member of Irish Rural Link (IRL) for more than twenty years, Paddy recalled its foundation, when the group took a visit to his native Kenagh.

“It was one of the first outings of then President Mary Robinson,” Paddy revealed. “I’m twenty­two years a member of the board and I was the longest standing board member.”

He also explained that he had attended gatherings of the organisation in 16 counties across Ireland, where he met, and kept in touch with, many friends over the years.

Paddy’s recent departure from the group, and his dedication to them were perhaps important factors when it came to awarding him a Lifetime Achievement Award for Outstanding Contribution to Community Development in Rural Ireland in Moate on May 7 last.

“It was a great experience over the years,” he continued, adding that it was a great honour to achieve the award, particularly so soon after receiving the honour from the Dublin Association.

“That was a great night,” he smiled, referring to the association’s annual dinner dance, where he was joined by his wife Gertie and their daughters, who travelled from as far as America to cheer on their beloved dad.

But just because Paddy has taken a step back from Irish Rural Link doesn’t mean he’ll be stepping down from his other duties ­ quite the opposite, in fact.

“I’m still very much involved locally,” Paddy assured, referring to just two of the many groups to which he contributes: Kenagh Co­op and Ballymahon’s Leo Casey Historical group.

“I’ll still be writing all the time, too,” he concluded.