All County Football League Division 1 - Round 5 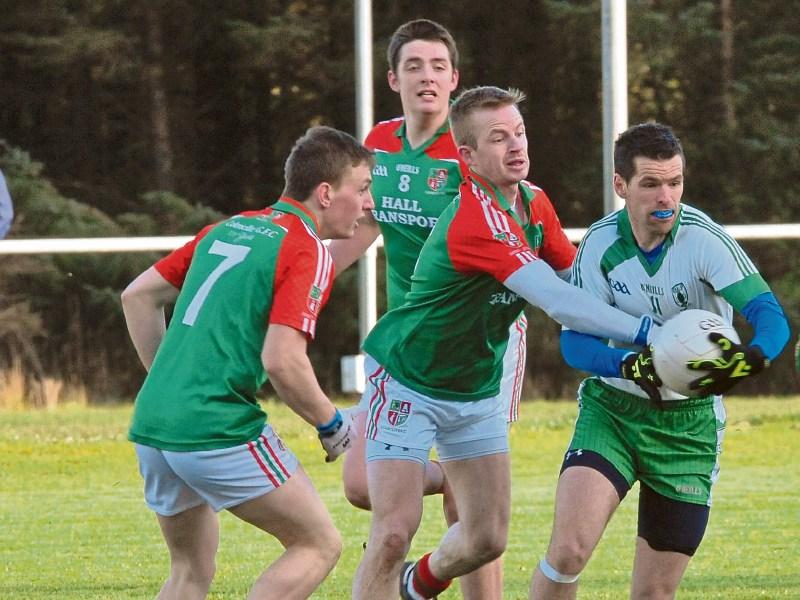 Colmcille suffered defeat for the first time in the Division 1 league this season as they were left to rue a poor start and missed chances in the Round 5 clash against Killoe at McGee Park on Friday evening last.

With 20 minutes gone on the clock Emmet Og had scored 1-7 while Colmcille were yet to register a score. In the end four points were the difference but Colmcille squandered chances and could have got something out of the game if they weren’t so poor in front of the posts.

Sean McCormack and Mark Hughes led the attack for Killoe as they made a fine start to the game. Hughes got the game’s first score just seconds in and McCormack followed up with a fine point.

Hughes and a Ciaran Donohoe point put Killoe ahead by four in the 11th minute. Two more points from McCormack and a Hughes effort extended the lead to seven points with Colmcille yet to raise a flag.

In the 19th minute McCormack got the Killoe goal when he found the back of the net with a speculative shot from about 30 yards out. Two minutes later and Colmcille got their first score of the game when Barry McKeon set up Darren Mulligan for a goal.

A free from McKeon cut the gap to seven in the 22nd minute. Colmcille had a chance of another goal in the 24th minute when Fergal Sheridan played the ball into Barry McKeon but his shot just went wide.

Just before the break Sean McCormack pointed a free to leave seven between them at half-time; 1-8 to 1-1. Barry McKeon got the first point of the second half before Killoe had another goal chance but Daniel Mimnagh’s effort went wide of the post.

It was all action in the opening minutes of the second half and the lead was cut to just four in the 34th minute. But Killoe went seven up again by the 40th minute. Good play from Simon Kiernan set up Eugene Clarke up for a point and then Ciaran Donohoe got his second score along with a Sean McCormack free.

Entering the final 10 minutes of the game Killoe went ahead by eight points when Denis McGoldrick got on the scoresheet. Colmcille though kept battling away and Fergal Sheridan was unlucky to see his shot go over the bar instead of under with four minutes remaining.

Colmcille went looking for a badly needed goal but just could not find a way past Killoe keeper Micheal Hughes and the best they could do was a couple of late consolation scores from frees converted by Shea McKeon and Paul McKeon.